The escalating pattern of politically motivated violence in Burundi demands a response from the United Nations Security Council before the hostilities can evolve into wholesale atrocities, a group of the Organization’s independent experts have warned.

“The international community must not simply stand by and wait for mass atrocities to unfold, thereby risking a major conflict of regional proportions before it finally decides to act,” the experts said in a statement released today by the Office of the UN High Commissioner for Human Rights (OHCHR).

The mounting violence across Burundi has also provoked a widespread humanitarian crisis as refugees have spilled across the country’s borders and fanned throughout the region. Indeed, by late last week, more than 145,000 people had already fled to neighbouring countries.

“This can escalate into major conflict through the use of outright repression against, and intimidation of, the population at large, the instrumentalization of the police, the closure of independent media, as well as the detention of the opposition and other civic leaders,” they continued. “We also witness efforts to coerce the judiciary, some of whose highest members have fled the country claiming their lives were at risk.”

At the same time, noted the Special Rapporteurs, armed militias, with the collaboration of authorities, exercised targeted violence against civilians.

Burundi’s elections, originally scheduled for 15 July, have now been postponed by six days to 21 July in order to mitigate the effects the tensions may have on the final vote. However, the delay, the experts cautioned, did not remedy the atmosphere of fear pervading throughout the country.

To that point, they appealed to the Security Council to exercise its “unique role for peace and security and for preventing conflicts worldwide” and address the crisis head-on.

“This is a crisis that is eminently preventable – everyone can see the risks. What is lacking is action,” underscored the independent experts. “Given the painful history of Burundi and the region, the long engagement of the United Nations in the country to re-build peace, the Security Council must be all the more alerted to the increasing potential of an escalation of massive violence.” 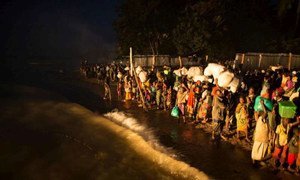 One day after United Nations High Commissioner for Human Rights Zeid Ra'ad Al Hussein alerted the Security Council about the seriousness of the electoral crisis in Burundi, his Office today issued a new warning about the impact the “extremely tense situation” there could have on the stability and the development of Central Africa.