OCHA/P. Kropf. June 2015
Residents of Sana’a, capital of Yemen, collecting water at one of the few public distribution points, as most water pumps across the city are no longer working because of the fuel shortages.
15 July 2015

“I call again on all parties to the conflict to agree an immediate and unconditional humanitarian pause across the country,” Stephen O’Brien, the Emergency Relief Coordinator, said in a statement just days after an expected humanitarian pause failed to take hold over the past weekend.

“I am even more deeply concerned by the catastrophic humanitarian situation in Yemen,” said Mr. O’Brien, who is also the UN Under-Secretary-General for Humanitarian Affairs.

A separate note issued in the capital of Sana’a today by the humanitarian community in Yemen, including the United Nations, said the country this week has seen some of the deadliest days recorded since the conflict escalated in March and appealed for access to and funding for the staggering four out of five Yemenis in need of aid.

In his statement, Mr. O’Brien urged the parties to abide by their obligations under international law to protect civilians and facilitate rapid, safe and “predictable access” for humanitarian workers to reach all people who need assistance, wherever they are in Yemen.

“Millions of women, children and men are facing terrifying violence, extreme hunger and little medical assistance as the fighting, shelling and bombing by all parties show no sign of abating,” he said.

“Despite the continued fighting, our humanitarian colleagues and their partners on the ground have been able to distribute some vital aid for the families in desperate need,” he said. “However, it is not nearly enough and we need access and funds to rapidly scale up critical humanitarian supplies and services.”

He went on to say that “a political solution to this conflict is what the people of Yemen need and I hope that the international community will do all it can for the Yemeni families who are counting on this.”

The statements today come a day after the United Nations reported that Yemen is impacted by one of the largest humanitarian crises in the world with 21 out of 25 million people in need of aid with the civilian death toll since 26 March at 1,670 and another 3,829 people injured. 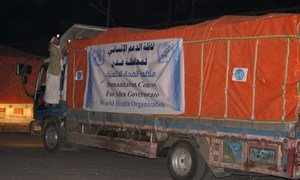 With an expected humanitarian pause failing to take hold in crisis-torn Yemen over the past weekend, the United Nations said today that four out of five people in the country rely on some type of assistance, and the World Health Organization (WHO) reported that it has been able to deliver urgently needed supplies to the port city of Aden.