‘We are getting closer to a solution,’ says UN Libya envoy, opening latest round of talks on ending crisis

Previewing what he hopes will be the last round of United Nations-backed political talks on Libya, the UN envoy for the country said today the fact that all the participants in the dialogue have accepted a fourth draft proposal as the basis for a final political solution is “extremely encouraging” that agreement could be reached during discussions over the coming days.

“We have just started this meeting, which the Libyans first of all, and everybody in the region…really [all of] us, expect to be the last round, the final round of talks,” Bernardino León, the UN Special Representative for Libya told reporters in Skhirat, Morocco, where he is facilitating the talks based on the draft political proposal he presented to the parties two weeks ago.

He said the parties and the UN facilitation are “getting closer to a solution” he is encouraged by the fact that all the stakeholders had accepted the draft as a basis for a final solution. “So, we are really looking forward to our discussions in the coming days and the possibility to have an agreement which is accepted by everybody.”

“This is the challenge we have. This is what we are trying to do,” he continued, telling reporters that the meetings had begun hearing remarks on the text by the GNC (General National Congress). Some of the other participants would be arriving in the coming hours and over the next few days he could provide a more concrete reading of what those remarks are about and the possibilities of finalizing a text which would be broadly accepted “as soon as possible.”

Responding to questions regarding changes to the text proposed by some parties, Mr. León asked for time to analyse the suggestions. “We are in a negotiation. This is a work trying to reach consensus, trying to integrate [all] points of view. But until we have a complete reading of the remarks presented by everybody we will not be in a position to assess what the possibilities for the text are.”

Calling the current stage “preliminary work”, he said that in the coming days “we will be in a much better position to assess exactly the possibilities to reach this consensus.” 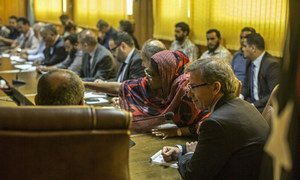 As part of an overall United Nations-supported effort on the security track of Libya’s national dialogue, the UN envoy for country has met in Misrata with representatives of armed groups, stressing the importance of local ceasefires and reconciliation agreements are welcome developments.