24 June 2015
A United Nations-appointed commission of inquiry today warned that the dire situation in Eritrea can no longer be ignored and called on the UN Human Rights Council to maintain close scrutiny on violations committed in the Horn of Africa nation that may constitute crimes against humanity.

“The number fleeing such a small country – estimated at 5,000 people each month – is forcing the outside world to take notice,” Mike Smith, Chairperson of the Commission of Inquiry on Human Rights in Eritrea, told the 29th session of Council, which is meeting in Geneva, Switzerland, upon delivering the nearly 500-page report.

“Eritrea’s dire human rights situation can no longer be ignored,” Mr. Smith said. “Imagine the impact of this uncertainty on young Eritreans who lose all control over their own futures. Is it any wonder that Eritreans – most of them young people – are the second largest nationality after Syrians to resort to seaborne smugglers to cross the Mediterranean to Europe?”

The number of Eritreans fleeing their country reached more than 400,000 – nearly doubling over the past six years, according to the UN refugee agency.

On the basis of this body of evidence, the Commission report, which was issued on 8 June, said it “found that systematic, widespread and gross human rights violations have been and are being committed in Eritrea under the authority of the Government. Some of these violations may constitute crimes against humanity.”

Mr. Smith told the Council that after more than two decades of independence, the dream of a democratic Eritrea now seems more distant than ever.

“Instead of a country ruled by law and good governance, the Eritrea we see today is marked by repression and fear,” Smith said. “Since independence, ultimate power in Eritrea has remained largely in the hands of one man and one party. Those in control often rule arbitrarily and act with impunity… The Eritrean people have no say in governance and little control over many aspects of their own lives.”

For example, the report notes that Eritrea has never held free elections, has no independent judiciary, arbitrary arrest is common – often ordered by anyone with de facto authority, with tens of thousands of Eritreans being imprisoned, often without charge and for indeterminate periods.

In addition, the Government has subjected much of the population to open-ended national service, either in the army or through the civil service, often for years in harsh and inhumane conditions.

Denied access to Eritrea, the Commission members conducted interviews with some 550 witnesses in eight countries and received 160 written submissions. On 9 June, the Eritrean Foreign Ministry issued a statement describing the Commission’s findings as ‘an attack, not so much on the Government, but on a civilized people and society who cherish human values and dignity.’

In response to that charge, Mr. Smith said: “With respect, we the commission are recording the voices of real Eritrean people as articulated in the 550 testimonies and 160 submissions received. We also reflect the silenced voice of the majority of Eritreans who have never been able to elect their own representatives in national, free, fair and democratic elections...and it is the voice of those who every day risk their lives to flee a government that has failed them and all of the others.”

Mr. Smith said the most urgent measure was for Eritrea to change political will and acknowledge the issues it faced, followed by the adoption and implementation of the constitution, which would include the rule of law and access to justice for victims. Eritrea also had to urgently demobilize its citizens and end indefinite military service, as well as release all political prisoners.

“It is high time that the Government of Eritrea truly endeavours to improve the human rights of its people,” Smith concluded. “We need to see real progress, not just words.”

Meanwhile, Sheila B. Keetharuth, Special Rapporteur on the situation of human rights in Eritrea, also presented her report to the Council, which focused on forced evictions and demolitions as a violation of the right to adequate housing. She said that the figure of approximately 800 houses bulldozed in Asmara and several other villages in the vicinity represented conservative estimates collated from different sources, as no official statistics were available.

Ms. Keetharuth, who is also a member of the Commission, said in her capacity as an independent special rapporteur other issues in Eritrea that should remain on the agenda were: arbitrary detention, unaccompanied minors, migration, and economic and social rights.

The Commission was established by the Human Rights Council in June 2014 to investigate all alleged violations of human rights in Eritrea. In addition to Mr. Smith and Ms. Keetharuth, the third member is Victor Dankwa.

UN chief welcomes meeting between leaders of Djibouti and Eritrea

Security Council will not renew arms embargo on Ethiopia and Eritrea 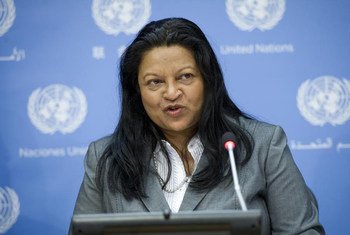 8 June 2015
Amid “systematic, widespread and gross human rights violations,” the human rights situation in Eritrea has degenerated into a climate of fear in which dissent is stifled and large swathes of the population are subjected to forced labour and imprisonment, a new United Nations report has found.