Ukraine: UN warns number of displaced persons and refugees on the rise

WFP/Abeer Etefa
A reminder of the deadly destruction in the conflict in Mykolaivka in the Donetsk region of eastern Ukraine.
18 June 2015

The number of people fleeing their homes in Ukraine continues to rise, according to the UN Office for the Coordination of Humanitarian Affairs (OCHA).

According to OCHA’s latest update, no crossing points are available for humanitarian cargo to non-government controlled areas of Donetsk and Luhansk oblasts.

“Access to water remains a critical issue for many civilians living along the contact line, up to 1 million people being at risk of lack of access to safe water,” pointed the update from June 12.

Funding for humanitarian operations remains critically low: only 31 per cent of $316 million required for 2015 is funded or pledged.

Several locations across the contact line continue to be theatre of fighting, resulting in additional humanitarian suffering and loss of lives. Since the beginning of the conflict, at least 6,500 people have been documented as killed and another 16,287 as wounded in the conflict zone of eastern Ukraine, OCHA emphasized. 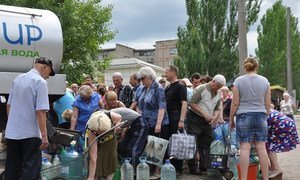 The number of internally displaced persons (IDPs) in Ukraine has soared to over one million due to the ongoing conflict in the country’s eastern regions, the United Nations humanitarian office reported today.