Next time you are in the shower using a refreshing exfoliating shower gel, take a moment to check what the scrubbing agents are made of. According to the United Nations Environment Programme (UNEP), chances are pretty high they are made of tiny plastic beads, and by the time the container is empty, you will have used and poured down the drain as much plastic as the packaging the gel came in.

This alarming fact is contained in a UNEP report Plastic in Cosmetics: Are We Polluting the Environment Through Our Personal Care?, which is a compilation of currently available knowledge on the linkages between cosmetics and plastic pollution in the oceans.

According to the study, “for the last 50 years, microparticles of plastic, or microplastics, have been used in personal care products and cosmetics, replacing natural options in a large number of cosmetic and personal care formulations.”

“Microbeads and other plastic ingredients are present in products ranging from toothpaste and shower gel to eye shadows and nail polish,” it said. “Their proportions vary in different products, from less than 1 per cent to more than 90 per cent of the content. In a typical shower gel analyzed in laboratory, there was roughly as much plastic material in the gel itself as in its packaging.”

And “washed down the drain, those particles cannot be collected for recycling, nor do they decompose in wastewater treatment facilities, inevitably ending up in the global ocean, where it fragments and remains” and “these plastics may take hundreds of years to completely degrade,” according to UNEP’s research.

The report, which was released earlier this month on the occasion of World Oceans Day, recommends a precautionary approach toward microplastic management, with an eventual phase-out and ban of their use in personal care products and cosmetics.

Currently, in the United States, Illinois became the first state to enact legislation banning the manufacture and sale of products containing microbeads. This two-part ban will enter into effect in 2018 and 2019.

And UNEP has announced the development of an app – ‘Beat the Microbead’ – in seven languages that allow customers to check whether personal care products contain microbeads by scanning a products barcode. UNEP said the app has been very popular, convincing a number of large multinationals such as Unilever, Johnson & Johnson and the Body Shop to announce their intent to stop using microbeads.

And the Netherlands, Austria, Luxembourg, Belgium and Sweden have issued a joint call to ban the microplastics used in personal care products, saying the measure will protect marine ecosystems – and seafood such as mussels – from contamination.

The UNEP study reports that “a typical exfoliating shower gel can contain roughly as much microplastic in the cosmetic formulation as is used to make the plastic packaging it comes in,” which translates into more than 4,300 tonnes of microplastic beads used in 2012 across all European Union countries.

It goes to say that plastic ingredients in these products are poured down the drain after use, cannot be collected for recycling, and do not decompose in wastewater treatment systems.

“More than 299 million tonnes of plastic was produced worldwide in 2013 some of which made its way to our oceans, costing approximately $13 billion per year in environmental damage to marine ecosystems,” according to UNEP. “Once in the ocean, plastic does not go away: it fragments, eventually breaking down into smaller pieces known as secondary microplastics.”

The UNEP report makes several recommendations for producers and consumers, as well as for researchers and policymakers.

It asks producers to take the potential impact of product ingredients on the natural environment into account during the design phase, consumers to “look in your bathroom – what contains microbeads – download the Beat the microbead app and avoid buying products that contain these plastics,” governments to promote phase out of microplastics in personal care and cosmetic products and researchers to look more into the implications of nano- and micro-sized plastics on human and marine ecosystem health, especially through ingestion and chemical transfer through the food chain. 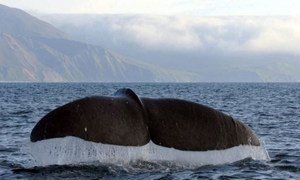