‘Inaction on climate change now will cost us all in the future,’ UN labour chief warns work summit

FAO/Sue Price
Climate change poses a threat to survival in the Southwest Pacific, and in most of the small islands around the globe.
11 June 2015

The head of the International Labour Organization today opened a summit meeting devoted to tackling climate change as a unique opportunity for job creation and economic growth, saying that up to 60 million jobs can be created in a greener, low carbon economy if the right policies are adopted.

“Inaction on climate change now will cost us all in the future,” ILO Director-General Guy Ryder said in his keynote address to the World of Work Summit taking place during the International Labour Conference, bringing together the agency’s member States at its headquarters in Geneva, Switzerland.

Mr. Ryder underlined both the challenges and opportunities presented by a transition to greener economies, and kicked off this year’s summit that focused on climate change, ahead of a UN conference on the issue this December in Paris.

“We are beginning to witness very clearly how the effects of climate change ripple through enterprises and labour markets,” he said. “We also see that this is different from one region to the other, across segments of the labour force, indeed from one occupation to another.”

While some countries are struggling with persistent droughts, he said, others simply witness changes in the timing and rhythm of their agricultural and even their fishing seasons, affecting food production and security, and peoples’ incomes.

“But we now also know that there is much potential for more and better jobs if we work towards sustainable development – so this is a debate about opportunity as well,” he said.

The ILO chief kicked off a high-level panel on ‘Climate Change and the World of Work’ that discussed how governments, workers and employers can help build resilience and create solutions in pursuit of social justice, productive employment and sustainable enterprises, and ensure a just transition for all.

“Young people expect us to leave behind a viable planet where they can enjoy a decent life and decent work,” he said.

Addressing the younger generation, frequent UN collaborator Pharrell Mr. Williams, the Grammy-winning American singer and songwriter of, among others, the global hit Happy, called on the international community to tackle the dual challenges of climate change and youth unemployment.

“I believe that climate change is one of the defining issues of our time, one that threatens our very existence on Earth,” said Williams in a video address at the Summit. “We’ve also got another serious problem on our hands: millions of young people who don’t have jobs, and don’t have access to the education and skills they need to get them.”

Williams called on the key players of the world of work ? governments, employers and workers ? to ensure that green, decent jobs are right at the top of the agenda when the world meets at the climate change conference at the end of the year. 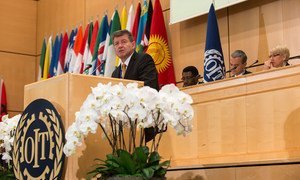 At Geneva jobs summit, UN labour chief urges a global debate on the future of work