Religious leaders have a pivotal role to play in times of turmoil, during which they can provide a values-based glue to hold communities together and provide common ground for peace-making and problem solving, United Nations Secretary-General Ban Ki-moon said today at a conference in Kazakhstan.

“You can do so by fostering dialogue; by using spiritual authority to encourage individuals to act humanely; and by promoting shared values – as enshrined in the Universal Declaration on Human Rights and the International Covenant on Civil and Political Rights – and as reflected in the teachings of all world religions,” Mr. Ban said in his remarks to the Congress of Leaders of World and Traditional Religions, held in Astana.

In his opening remarks to a dialogue to promote peace and prosperity in turbulent times – which echoed the UN General Assembly thematic debate on “Promoting Tolerance and Reconciliation” held in April – the Secretary-General reminded religious leaders, both traditional and non-traditional, of their obligation to speak out when “so-called adherents of their faith” commit crimes in its name.

“[They] must teach their followers the true meaning of reconciliation, understanding and mutual respect,” Mr. Ban emphasized. “All…crimes committed in the name of religion are crimes against religion,” he stressed, condemning the atrocities committed by Da’esh, Boko Haram, Al Shabaab, Al Qaeda and “other sectarian and terrorist groups.”

Convinced that the scourge of violence in the name of religion calls for concerted action by governments, religious communities, civil society and the media, Mr. Ban highlighted the upcoming launch, during the 70th session of the General Assembly, of a plan of action on the prevention of violent extremism.

Often bearing “the brunt of violent ideologies,” women and young girls must be provided with a stronger, more equal platform, as a “means of advancing respect, changing mindsets and shifting global consciousness,” he said.

Youth must also be a priority, as the age profile of some countries is sometimes cited as a reason to issue warnings that a “surging” population of young men inevitably drives increased violence and insecurity.

Noting that many countries with a high proportion of young people have not suffered violence though, the UN chief pointed to factors such as long-term economic decline, limited educational and employment opportunities, as well as exclusion from social, cultural and political participation.

But in all the international community does against radicalization, the respect of international law always must prevail and leaders and policy-makers must recognize a powerful truth –“the larger the spaces for democracy and fundamental freedoms, the smaller the chances for extremism and violence.”

There is no greater cause today than building bridges of understanding and cooperation among communities, Mr. Ban stated. “Our challenge is to go beyond the notion of tolerance or simply acknowledging or abiding the existence of the other. No one wants to be merely tolerated, as if there is something wrong with them. Tolerance must be more active and dynamic.”

The importance of human rights in fostering development and peace remained a constant theme during the Secretary-General’s visit to Kazakhstan and reverberated widely during his remarks to the press with the country’s Foreign Minister Erlan Idrissov later in the day. Once again drawing from the Universal Declaration on Human Rights’ entreaty for the right to freedom of thought, conscience and religion across the world, Mr. Ban explained that in Kazakhstan, as anywhere else, “all religious and minority groups should be guaranteed this right on an equal footing.”

“Governments around the world should recognize the decisive role of this and other fundamental freedoms in fostering pluralism, understanding and democracy,” he told reporters, adding that Kazakhstan should also continue to make progress on human rights, including the development of “a comprehensive National Human Rights Action Plan.”

“Let us work together to help people everywhere around the world so that they can achieve their dreams,” Mr. Ban concluded. “Dreams – everybody should be able to live in peace, harmony and friendship and well-being and dignity.”

♦ Receive daily updates directly in your inbox - Subscribe here to a topic.
♦ Download the UN News app for your iOS or Android devices.
UN70|tolerance

Tolerance is key to peace and fight against terrorism, UN officials say 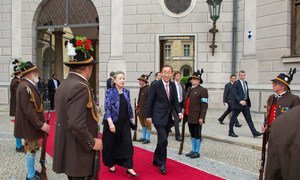 Concerned by the spread of violent extremist groups and the “malicious and hateful ideologies” that fuel them, Secretary-General Ban Ki-moon today outlined elements of an action plan he will present later this year to reinforce good governance, which he sees as terrorism’s true deterrent.