The United Nations peacekeeping mission in the Democratic Republic of the Congo (MONUSCO) has welcomed the latest military operation by the country’s armed forces against members of an independent militia group following the collapse of political negotiations.

The military operation – launched on 3 June by the national army (FARDC) against militants aligned with the Front de Résistance Patriotique de l’Ituri (FRPI) – is the latest attempt by the UN-backed Government forces to protect civilians and neutralize the threat posed to peace in the country.

“This attack demonstrates the strong commitment of the Government of the Democratic Republic of the Congo to fight all armed groups,” the Secretary-General’s Special Representative and head of MONUSCO, Martin Kobler, said in a press release.

MONUSCO’s support comes at the FARDC’s request following a breakdown of negotiations with FRPI combatants who, as of early 2015, counted a contingent of some 300 child soldiers among their ranks. In addition, the militia also stands accused of gross human rights violations and illegal traffic of natural resources.

Speaking from the frontlines of the hostilities from where he is supervising the UN’s on-the-ground engagement, MONUSCO Deputy Head David Gressly reaffirmed the Organization’s commitment to finding a peaceful solution to the country’s political impasse.

“The National Disarmament, Demobilization and Reintegration Programme, which we fully support, will make every effort to welcome combatants who lay down their arms,” Mr. Gressly stated. “I call on FRPI combatants to enrol in this Government programme which is supported by MONUSCO.”

Mr. Gressly is currently travelling between the cities of Bunia and Aveba, in the country’s northeast, where MONUSCO has deployed several units and used attack helicopters to support the Congolese army’s efforts. 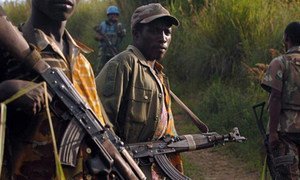