The prices of major food commodities continued their downward trajectory through May as cereal prices dropped amid an increasingly favourable forecast for this year’s harvests, the United Nations Food and Agriculture Organization (FAO) confirmed today.

According to the UN agency’s monthly Food Price Index, the May 2015 forecast for the global production of wheat, coarse grains and rice has been “upgraded” as maize harvests in China and Mexico as well as more abundant wheat harvests in Africa and North America are currently anticipated.

In addition, the Organization also predicts that global rice output will grow by 1.3 percent from last year mainly due to increases across Asia. That forecast, however, remains subject to “much uncertainty,” as the outcome of the season will very much depend on the unfolding of the season in the next few months, the FAO said.

Overall, the agency added, the Food Price Index is registering its lowest value since September 2009.

Meanwhile, bucking the trend, the sugar price index rose 2 per cent, due to temporary delays in Brazil’s crushing season despite abundant supplies and the vegetable oil price index rose 2.6 per cent, partly driven by concerns that the strengthening of meteorological conditions provoked by El Niño may affect production in Southeast Asia. 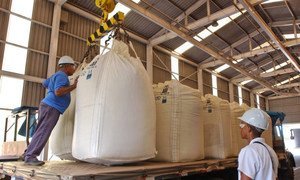 After three months of stability, the United Nations Food and Agricultural Organization’s (FAO) Food Price Index declined in December, meaning the index fell over the course of 2014 for the third consecutive year.