The Security Council today voiced deep concern about the “grave situation” in Yemen and urged the country's stakeholders to engage as soon as possible in United Nations-brokered inclusive political consultations.

In a statement released late this afternoon, the 15-member Council reaffirmed its call on Yemeni parties to attend the talks and engage “without preconditions and in good faith,” including by resolving their differences through dialogue and consultations, rejecting acts of violence to achieve political goals, and refraining from provocation and all unilateral actions to undermine the political transition.

Expressing deep disappointment that the UN-backed consultations, previously scheduled to take place in Geneva on 28 May, did not take place, the Council also emphasized that the inclusive dialogue must be a Yemeni-led process and urged all parties “to resume and accelerate” them with the intention of brokering a “consensus-based political solution.”

In addition, the statement noted that the Council members reiterated their full support for the efforts of the UN and the Special Envoy of the Secretary-General and further called on Secretary-General Ban Ki-moon to “intensify” his good offices role in order to enable a resumption of “a peaceful, inclusive, orderly and Yemeni-led political transition.”

The ongoing political and security tensions have further aggravated Yemen's humanitarian crisis and food shortages with currently 12.5 million food insecure people in the country – some 2 million more than when the fighting began. The UN's World Food Programme (WFP) is aiming to provide emergency food assistance to 2.5 million people, and, from August, it plans to increase that number, reaching 12 million people by the end of the year.

To that point, the Security Council endorsed the Secretary-General's call for “a further humanitarian pause” in order to allow assistance “to reach the Yemeni people urgently” and called upon all sides to comply with international humanitarian law.

Finally, the UN body stressed the urgent need for ongoing commercial supplies to enter the country because of its “heavy dependence” on imported food and fuel.

As a result of shortages, food prices have skyrocketed and the cost of cooking gas has risen on average 131 per cent since the start of the crisis, according to WFP data.

Yemen, the poorest country in the region, also imports almost 90 per cent of its food from abroad. 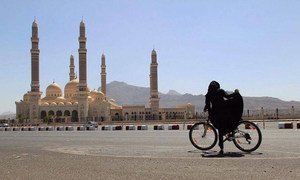 Appealing for funds, UN agency aims to reach 2.5 million in Yemen with food aid by July

Amid a worsening crisis and growing number of hungry people in Yemen, the United Nations World Food Programme (WFP) announced today that it is scaling-up its operations to get emergency food aid to 2.5 million people by July.