UNSMIL
Special Representative and head of the UN Support Mission in Libya (UNSMIL) Bernardino León.
29 May 2015

Libya is on the verge of economic collapse amid ongoing violence, political infighting and efforts by terrorists to “build strong bases” throughout the country, the envoy facilitating the United Nations efforts to restore peace there said as he briefed journalists on meetings held in Brussels discussing the situation in the North African country and efforts towards a political transition.

Speaking to the press yesterday, Bernardino León, Special Representative of the Secretary-General for Libya, said the UN is preparing a new draft political deal on the future of the country, which would be handed to parties in the first week of June. He expects the new draft to address the concerns of all parties, but made it clear that it was impossible to have a text that has 100 per cent of the wishes and ideas of everyone reflected.

“There will be an agreement if they understand clearly that they have to give up on important issues, that they have to be flexible,” he said. “A political agreement with concessions, even if it does not reflect the key concerns of the parties will be better than continuing this conflict that is going nowhere.”

Efforts went beyond the political, he said, pointing to a security track, where negotiations were ongoing with different armed actors, the army, armed groups, militias and others. He stressed the role of the international community, the UN and the European Union (EU) in future security arrangements.

“These two elements – political and security – have to work together if we want a stable Libya which will soundly return to democracy in the future,” he said.

He said that the second session of meetings focused on the role of the EU and the Organization’s partnership with the UN, noting that dialogue-centred approaches were “in the DNA” of both organizations and stressing the convergence that exists between them.

“Our views are the same about Libya,” he said. “It has to be a Libyan-owned process, a Libyan-Libyan solution with the support of the International community.”

The EU’s historical links to Libya in terms of trade, economics and politics were extensive and Mr León said the EU was a very important partner, as well as Libya’s neighbours, with whom the UN was also working closely.

He underscored it was “difficult to say” whether the new draft would bring about agreement within three or four weeks but he underlined the existence of the possibility and stressed that Libyans have a very clear idea that such an agreement was the only solution to their current predicament.

“Libya is on the verge of economic and financial collapse,” he explained, noting that the country is “facing a huge security threat” in the form of Da’esh (also known as the Islamic State in Iraq and the Levant or ISIL), as well as increasing political division.

“Da’esh is trying to build strong bases in Libya. Libya also is facing an increasing political division with these competing institutions in the east and in the west, so all these challenges will oppose the possibility of an agreement,” he said, stressing: “This is the context in which we are working, the context in which we are proposing this agreement and in three, four weeks we will see whether it is working or not.” 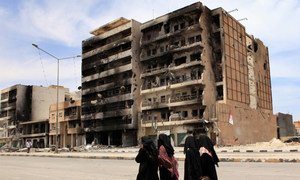 The United Nations Support Mission in Libya (UNSMIL) has condemned a spate of suicide bombings committed by Islamist terrorists in what it says is a blatant effort to undermine the country's ongoing political dialogue.