UN Photo/Eskinder Debebe
Under-Secretary-General for Humanitarian Affairs and Emergency Relief Coordinator Valerie Amos arrives for a briefing to the Security Council on Syria.
28 May 2015

The Security Council must set aside its political differences and come together to find a solution for the “intractable” and drawn-out Syrian conflict, the top United Nations humanitarian official urged today as she warned the 15-member body that the situation in the country was “extremely grave and deteriorating by the day.”

“In the past weeks, we have seen more and more heinous acts,” said Under-Secretary-General for Humanitarian Affairs and UN Emergency Relief Coordinator Valerie Amos in a briefing this afternoon. “Innocent men, women and children killed; maimed; displaced; and subjected to a savagery that no human should have to endure.”

Ms. Amos cited the aerial bombing of a market in Darkoush, in rural Idlib, at the end of April in which up to 50 people were killed and over 100 civilians wounded. The same market was hit once again last week with reports of twenty more people killed.

At the same time, the violent rampaging of militants aligned with the Islamic State of Iraq and the Levant (ISIL) continues to cause widespread devastation, she added. ISIL’s recent taking of Palmyra had resulted in the indiscriminate killing of civilians and “new depths of depravity” including “maiming, raping and destroying.”

Overall, some 12.2 million people, including 5.6 million children, need humanitarian assistance throughout Syria, according to the UN. And by conservative estimates, more than 220,000 Syrians have died in the conflict, but that number is likely much higher.

“People are trying to survive by the day, without the basic necessities of life such as water and electricity,” Ms. Amos continued. “And parties to the conflict continue to cut services, collectively punishing entire villages and cities in the process.”

However, despite reports of ongoing tragedies and the Security-Council’s previous efforts to end the violence and facilitate the delivery of humanitarian aid, the situation in the country has worsened.

She urged the Council “to demonstrate its leadership and uphold its responsibility” through specific measures, including ensuring the protection of civilians; ensuring that the parties to the conflict abide their international legal obligations; bringing an end to the siege of more than 400,000 people; considering all possible avenues to ensure accountability; stepping up financial support for humanitarian efforts; and respecting the non-political nature of humanitarian aid.

“I know that there are no easy answers or quick fixes,” she declared. “But I also know that we cannot let the difficult prevent us from upholding our responsibility to act on behalf of the people of Syria. We cannot leave Syrians abandoned to hopelessness and further despair.”

Today’s briefing was Ms. Amos’ last official address to the Council in her role as the UN’s humanitarian chief before she steps down from her post at the end of the month. 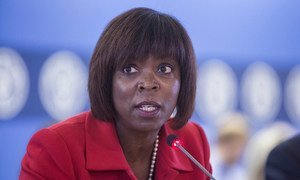 Pause in Syria fighting critical for farmers to harvest crops, get it to those in need – UN

The United Nations World Food Programme (WFP) has called for humanitarian pauses in Syria so farmers can safely harvest and transport crops within the country to reach all Syrians in need.