WHO Yemen
WHO mobile teams in Alluhaya district of Hodeida, Yemen, deliver health services to 880 displaced families.
18 May 2015

Stressing that Yemenis have faced “tragic levels of suffering and violence” in recent months, United Nations Secretary-General Ban Ki-moon has called on all sides in the conflict to refrain from any actions that undermine the safety and security of the country’s airports, seaports and transportation infrastructure, and to join consultations without preconditions.

Mr. Ban strongly encouraged ending immediately the interruptions in the import of fuel, food and medicines, in a statement delivered on his behalf by his Special Envoy for Yemen, Ismail Ould Cheikh Ahmed, yesterday in Saudi Arabia at the Riyadh Conference on the situation in the country.

“Yemenis have faced tragic levels of suffering and violence in recent months. The humanitarian pause is important to give them time to seek medical assistance and for much-needed basic goods to flow into the country. This pause must now become a permanent ceasefire and mark an end to all hostilities,” he declared.

In order to allow the UN to provide much-needed humanitarian assistance, Mr. Ban reiterated his call on all parties to ensure that humanitarian agencies and their partners have safe and reliable access throughout the country.

The Secretary-General said that he is strongly determined to intensify his good offices and he intends to convene in the near future an inclusive and widely representative conference that will restart a Yemeni-Yemeni peace process in accordance with the relevant Security Council resolutions.

According to UN spokesperson Farhan Haq, while in Riyadh, Mr. Ould Cheikh Ahmed met with Yemeni President Abd Rabbuh Mansour Hadi, Vice-President and Prime Minister Khaled Bahah and many Yemeni political leaders, as well as the ambassadors of the Gulf Cooperation Council (GCC) countries. He also met with General Abdulrahman Al-Banyan, Chief of Staff of the Royal Saudi Armed Forces, as part of his advocacy to secure an extension of the humanitarian pause.

For its duration, the humanitarian pause greatly facilitated access to areas which had been extremely difficult to reach. The UN Office for the Coordination of Humanitarian Affairs (OCHA) has reported that people affected by the conflict were able to move out of insecure areas, seek medical care and receive help, Mr. Haq told reporters at the daily noon briefing at UN Headquarters.

People previously trapped by fighting and airstrikes in Sa’ada, Aden, Lahj, Abyan and Al Dhale’e have reportedly moved from districts where access was previously blocked.

In the first four days of the pause, relief workers dispatched enough food aid to cover one month of food needs for more than 273,000 people, delivered fuel to ensure safe water access for 1.2 million people, and transported or distributed enough essential non-food items for nearly 32,000 people. Some 47 metric tonnes of medical supplies were given to hospitals and health facilities in five governorates.

However, insecurity, fuel shortages and other logistical challenges hindered full implementation of the humanitarian plan during the pause, Mr. Haq said.

Health facilities report that since 19 March, some 1,820 people have been killed and 7,330 injured due to the conflict. Casualty figures are likely to be underestimates. Humanitarian partners estimate that more than 545,000 people have been displaced in Yemen since 26 March. 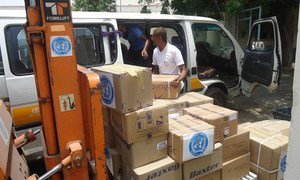 The first of six airplanes from the United Nations refugee agency bringing urgently needed aid supplies landed safely in Yemen today boosting relief stocks in the war-ravaged country, on the third day of the temporary humanitarian pause, the Organization has confirmed.