WHO Yemen
An additional 74 tonnes of medicines and medical supplies from WHO’s warehouse in Sana’a will be distributed during the humanitarian pause to 14 locations throughout Yemen.
15 May 2015

The first of six airplanes from the United Nations refugee agency bringing urgently needed aid supplies landed safely in Yemen today boosting relief stocks in the war-ravaged country, on the third day of the temporary humanitarian pause, the Organization has confirmed.

“These supplies will help alleviate the tough conditions for tens of thousands of desperate civilians wrenched from their homes as a result of the escalated conflict, as well as the closing down of what were already threadbare basic services,” said Ms. Charlotte Ridung with the Office of the UN High Commissioner for Refugees (UNHCR) in Yemen.

“The population of Yemen now has some breathing space and the humanitarian community the possibility to deliver much needed assistance,” she added.

The plane, carrying blankets, kitchen utensils and sleeping mats from stockpiles in Dubai, arrived at Sana’a International Airport at 15:45 local time. A second aircraft is expected to arrive later this afternoon. Four more flights will follow over the next two days, provided local security conditions allow. Together, the six flights will bring in 150 metric tonnes of relief supplies into Sana’a, while more aid is on its way via Djibouti by sea – part of a larger aid effort underway for 250,000 people.

Apart from some localized skirmishes, the humanitarian pause, which officially started in the evening of 12 May, has largely held – opening up roads, markets and supply routes to UNHCR and its partners.

In the last two days, UNHCR and partners have moved and distributed aid for displaced communities in Sana’a, Amran, and Haradh in the north of Yemen, while aid from our Sana’a warehouse has been moved to Aden for distribution to some of the most vulnerable displaced people in the south.

With local partners, UNHCR has also been reaching out to communities, carrying out new assessments to inform our aid distribution and identify urgent protection needs.

An estimated 450,000 Yemenis have been uprooted from their homes in the recent conflict, joining another 330,000 people, who were previously displaced.

Some 250,000 mainly Somali refugees in Yemen have also been affected by hostilities. Another 29,000 people of mixed nationalities have fled Yemen to neighbouring countries. 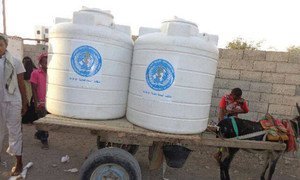 Secretary-General Ban Ki-moon has spotlighted the importance of Yemen's humanitarian ceasefire as the United Nations and its partners ramp up critical relief efforts to civilian populations in need, according to a spokesperson for the Organization.