A report on agricultural commodity prices released today by the United Nations agricultural agency says that hefty supply levels mean rates will continue to decline despite pressure from a slight reduction in global harvests.

“The world food import bill is forecast to reach a five-year low in 2015,” says Food Outlook, a biannual publication by the UN Food and Agriculture Organization (FAO) focusing on developments affecting global food and feed markets. “Currency movements and macroeconomic developments may have important implications for markets again in 2015-16.”

The Food Price Index, a trade-weighted database that tracks and aggregates on a monthly basis the prices of cereals, meat, dairy products, vegetable oils and sugar on international markets, reflected that decline, with a 1.2 per cent overall drop in April from March. The index reached 171 points, its lowest level since June 2010 and 19.2 per cent less than a year ago.

Food Outlook says international food prices are likely to stay under downward pressure due to large supplies, low freight rates and a strong US dollar, with import volumes of the five commodities little changed or even rising. The reduction in import bills is likely to benefit low income countries. 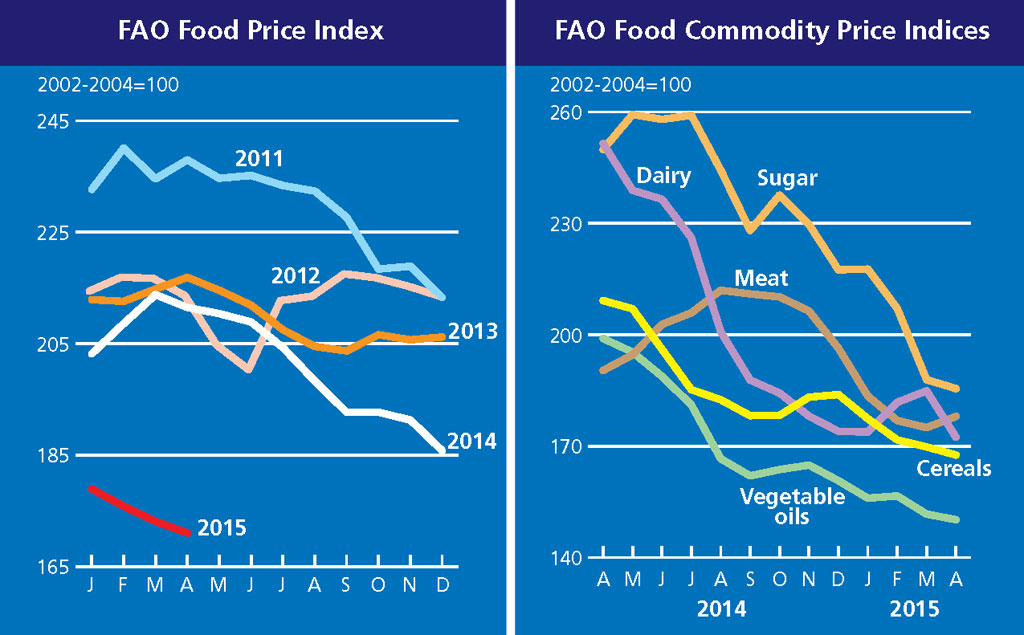 Dairy prices fell the most, buoying imports in Africa, while the abolition of the European Union’s (EU) milk quota system was also one of the main drivers of the 6.7 percent monthly drop. Sugar, cereals and vegetable oils prices also declined. By contrast, meat values rose in April, which was their first increase since August 2014.

Food Outlook also includes a special feature focusing on price volatility, highlighting a need to investigate whether volatility has returned to normal or not.

According to the United Nations Food and Agricultural Organization (FAO), the global food prices continued to decline in March – dropping some 40 points below last year’s level – with sugar prices sliding to their lowest level since February 2009.