The United Nations is proceeding with its investigation of the events surrounding the release to a third party of an internal report on allegations of sexual misconduct by French military personnel in the Central African Republic (CAR), a spokesperson for the Organization has confirmed.

In a statement issued on 29 April, the UN spokesperson’s office said the report – the result of an investigation conducted by the Office of the UN High Commissioner for Human Rights (OHCHR) in the CAR in late spring of 2014 – was provided to “an external party” in mid-July 2014 in an unedited form, which included the identities of victims, witnesses and investigators.

According to the UN, the unedited version was “provided unofficially” by a UN staff member to French authorities in late July, prior to even providing it to the OHCHR’s senior management.

“This constitutes a serious breach of protocol, which, as is well known to all OHCHR officials, requires redaction of any information that could endanger victims, witnesses and investigators,” the statement explained.

The investigation followed serious allegations of sexual exploitation and abuse of children by French military personnel, prior to the establishment of MINUSCA – the United Nations peacekeeping operation in Central African Republic.

At the same time, the UN is proceeding with a separate internal investigation into OHCHR’s handling of the matter, including the manner in which “the confidential preliminary findings were initially communicated to external actors, and whether the names of victims, witnesses and investigators were conveyed as part of that document,” the statement continued.

As a result of the report’s release, a staff member has been placed on administrative leave with full pay pending the results of the investigation. A preliminary assessment has deemed that the staff member’s conduct “does not constitute whistleblowing.”

He explained that the second investigation was internal, and was being carried out by the UN Office of the Internal Oversight Services (OIOIS) at the request of the High Commissioner. The investigation concerned the manner in which confidential information, and especially the identities of child victims and witnesses, as well as of the investigators, had been communicated to external actors in possible breach of strict rules that existed to protect victims, witnesses and investigators.

Obviously, that was a matter of great importance, which was why such rules existed, said Mr. Colville. 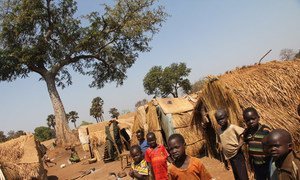