OCHA/Gemma Cortes
The displacement site in Batangafo, Central African Republic, is overcrowded with more than 30,000 people and daily receiving hundreds of people driven from their homes by violence.
27 April 2015

“We must prevent the Central African Republic from becoming a forgotten crisis,” said UN Humanitarian Coordinator Claire Bourgeois was quoted as saying in a press release.

“The current funding for the strategic humanitarian response does not allow us to ensure the protection of all these displaced persons or to provide the minimum of what is needed to meet the huge humanitarian needs,” according to Ms. Bourgeois.

According to the Office of the UN High Commissioner for Refugees (UNHCR) there are more than 460,000 refugees from the CAR in neighbouring countries and some 436,000 people are internally displaced. In the country, a total of 2.7 million people out of a population of 4.6 million are in need of humanitarian aid.

“Yet humanitarian assistance programmes both for the Central African Republic and the Regional Refugee Response Plan remain dramatically underfunded, with funding levels of only 14 per cent for programmes inside CAR and 9 per cent of the refugee programmes in the neighbouring countries,” the UNHCR press release said.

The World Health Organization, meanwhile, said only 55 per cent of the health facilities are functioning in a country that has among the world’s highest child and maternal mortality rates, and noted that other pressing crises like Syria and Yemen are siphoning off critically needed funding from the CAR.

UNHCR and partners are struggling to provide an adequate level of assistance to the refugees in the four neighbouring countries: Cameroon, Chad, the Republic of Congo and the Democratic Republic of the Congo.

“It is critical that the international community does not forget about the Central African Republic”, the agency quoted Liz Ahua, its Regional Refugee Coordinator. “Important progress has been made and we cannot allow these gains to be undone because of lack of funding and support.”

During his four-day visit, Mr. Ladsous will mark the achievement of full operational capability of the UN Mission there known by the French acronym MINUSCA established a year ago to protect civilians and support the transition processes in the CAR. Mr. Ladsous will meet with the transitional authorities, shortly before the opening of the National Bangui Forum on 4 May.

UNHCR said there are two crucial milestones coming up in the peace process: the first will be the Bangui Forum on National Reconciliation, bringing all parties together in May to address the political and security issues that lay at the centre of the crisis; and the second will be the national elections scheduled for August.

“The participation of internally displaced people and refugees in both processes will be crucial to their success,” it said. 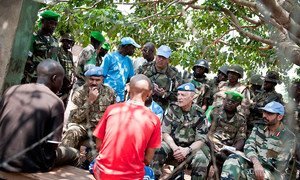 The United Nations Mission in the Central African Republic, known by its French acronym MINUSCA, has deplored the death and injuries resulting from a mob attack against its base in the city of Kaga-Bandoro – the second violent act of this kind in less than a week.