UNICEF/NYHQ2015-1014/Nybo
A woman feeds her infant, who was injured during the massive 25 April earthquake, at Tribhuvan University Teaching Hospital in Kathmandu, the capital of Nepal.
30 April 2015

“There is a critical window of opportunity to help crop producers plant in time to have a rice harvest this year and regain their self-sufficiency,” FAO Representative in Nepal, Somsak Pipoppinyo, said in a statement to the press.

“At the same time, we need to do all we can to preserve vital livestock assets which provide affected families with much needed income and nutrition,” he added.

Farmers who miss the planting season that is expected to start late May onwards will be unable to harvest rice – the country's staple food -- again until late 2016. This, together with likely losses of food stocks and wheat and maize harvests, would “severely” limit food supplies and incomes in the South Asian country, where around two-thirds of people rely on agriculture for their livelihood, FAO said.

Last week, a 7.8 magnitude earthquake shook Nepal, killing thousands while limiting access to food and leaving some 3.5 million in need of food assistance. An estimated 8 million people across the country's Western and Central Regions are affected by the disaster, including its largest cities, Kathmandu and Pokhara.

Although damage to the agriculture sector has not yet been assessed, affected families have likely lost livestock, crops, food stocks and valuable agricultural inputs. The disaster has destroyed markets and infrastructure, including roads and crucial irrigation and drainage canals. As a result, internal trade, including the movement of emergency aid, is severely constrained.

Before the earthquake hit, FAO estimated Nepal's wheat production in 2015 at 1.8 million tonnes. But crop damage and farmer's inability to harvest in earthquake-affected areas are likely to change this forecast.

In its response, FAO and partners will support the Nepalese government in preventing further loss of livestock by providing animal feed and veterinary supplies. FAO will also support 20,000 of the most vulnerable farming households protect and rebuild their livelihoods.

announced that its Executive Director, Ertharin Cousin, is travelling to Nepal to see first-hand what the programme is doing to assist hundreds of thousands of quake survivors.

While in Nepal, Ms. Cousin will meet with government officials and humanitarians workers involved in the relief effort. She is scheduled to travel to remote locations where WFP is delivering food.

The visit comes after WFP issued an urgent appeal for $116.5 million to provide food for 1.4 million people over the next three months.

In total, UN agencies and its partners have launched a $415 million emergency appeal for Nepal to address the most urgent needs. FAO’s appeal is part of a larger $128 million request under the Food Security Cluster, led by FAO and the World Food Programme (WFP). In addition to emergency agriculture support, the cluster aims to distribute 50,000 tonnes of food to families in need, along with setting up cash-transfer programmes and helping communities rebuild. 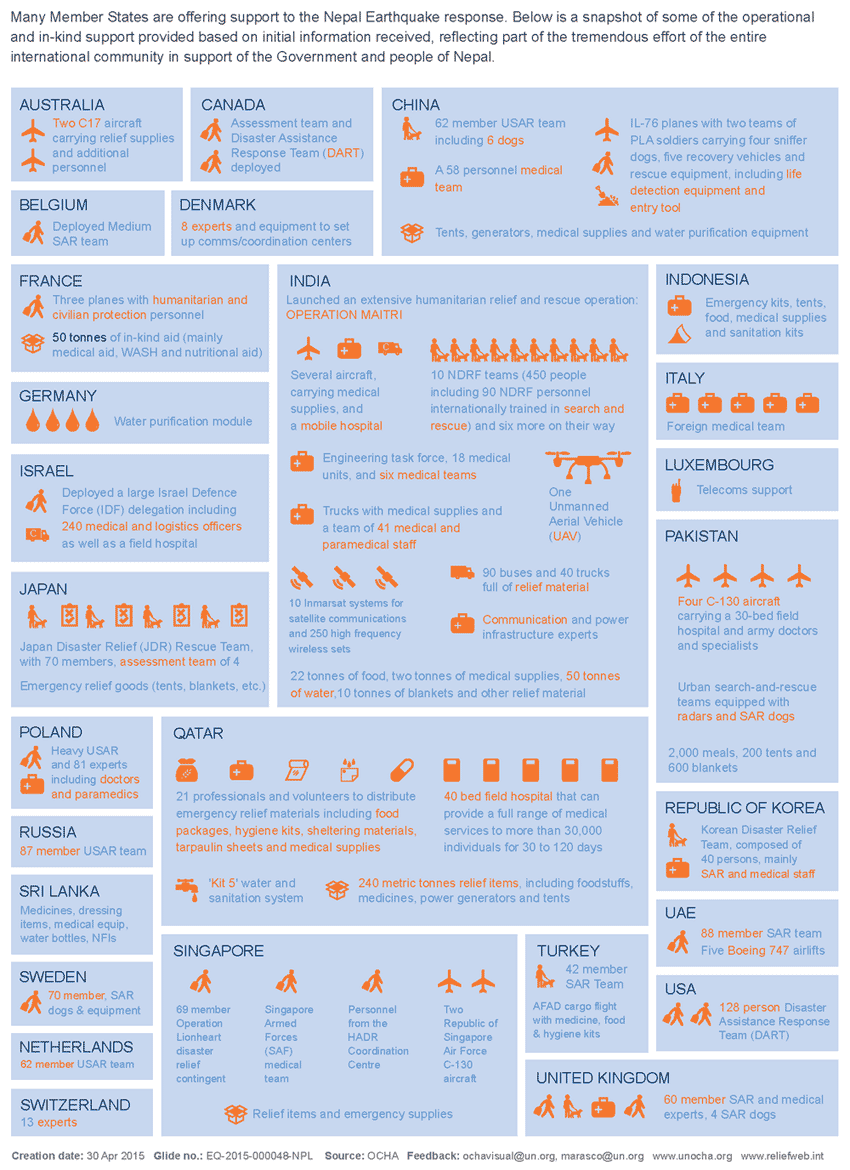 The United Nations today launched a $415 million emergency appeal to provide vital relief to people affected by the devastating 7.8 magnitude earthquake that struck the densely populated Kathmandu Valley in Nepal on Saturday, killing at least 5,000, injuring at least 10,000 more.