WHO Yemen
WHO condemns attacks on health facilities in Yemen and calls for immediate access.
28 April 2015

In a press release issued earlier today, the UN Office for the Coordination of Humanitarian Affairs (OCHA) reported that violence had disrupted services at two major health facilities in the conflict-ridden Gulf state.

According to OCHA, militants entered the Al Jumhouria Hospital in the south-western city of Aden on 27 April and opened fire causing patients and doctors to flee. Meanwhile, following an attack last weekend, the main hospital in Haradh, which serves more than 150,000 people, remained deserted.

The UN has reminded all parties to the conflict that they remain “legally obliged” under international humanitarian law to respect and protect civilians and to spare them from the effects of the fighting and called for “all attacks on hospitals must stop.”

Against that backdrop, water processing plants that supply drinking water to the capital, Sana’a, have closed and public transport and operations at financial institutions have been reduced because of the lack of fuel, OCHA’s press release continued.

It added that humanitarian partners are estimating that more than 300,000 people have now been displaced by the escalating conflict, particularly in Hajjah, Al Dhale'e and Abyan Governorates while food distributions in Hudaydah Governorate will stop today due to a lack of fuel.

At the same time, OCHA cautioned that relief efforts in other locations will also run out of fuel in the next few days, impacting tens of thousands of people.

The situation in Yemen has been deteriorating since the country formed a new Government in November 2014 aimed at ending a period of political turbulence and bringing about a full transition towards democracy. Nonetheless, the country has continued to be plagued by violence and mass political demonstrations despite UN efforts to bring about a peaceful political resolution. 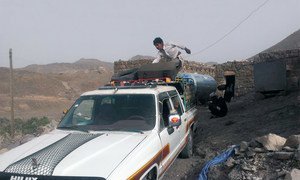 The United Nations human rights office said today that civilians are continuing to die in Yemen, with the total number killed between 26 March and 22 April now estimated at 551, including 31 women and at least 115 children.