UNHCR/F. Malavolta
Refugees and migrants rescued at sea by the Italian Coastguard ship Bettica arrive at Port Augusta. On the boat are four separate groups of people who were rescued. Many are women and children.
24 April 2015

The United Nations refugee agency welcomed the European Union's (EU) mobilization of resources in response to the ongoing migrant crisis in the Mediterranean, while also urging increased efforts aimed at saving lives and integrating asylum seekers in accordance with human rights.

Briefing reporters in Geneva earlier today, Adrian Edwards, spokesperson for the Office of the UN High Commissioner for Refugees (UNHCR), applauded the EU's tripling of funding for joint sea rescue operations following the maritime tragedy that claimed the lives of hundreds of migrants late last week.

“We appreciated the assurance given at the [Brussels] summit press conference [on Thursday] that this will mean an operation with similar capacity, resources, and scope to the Mare Nostrum operation,” Mr. Edwards said, referring to the Italian sea rescue operation begun in 2013 and which concluded last year.

“We look forward to working closely with the EU and its Member States in building on some of the measures that have been announced.”

Italy's 'Mare Nostrum,' a major search and rescue programme aimed at saving migrants in the Mediterranean, was replaced in December by the European Union's current 'Triton' operation amid an uptick in sea crossings in the region. Under 'Mare Nostrum,' 150,000 migrants were reportedly saved before it transitioned into its “less effective” substitute, according to UNHCR.

Meanwhile, 2015 has already seen some 40,000 people make crossings to Italy and Greece – the first and second largest countries of arrival respectively. UNHCR has reported that numbers have also been recently picking up as weather conditions in the Mediterranean improve.

Mr. Edwards, however, noted that addressing the migrant crisis did not stop with the boosting of at-sea rescue operations as the Mediterranean boat crossings were not purely a migrant phenomenon but a refugee one as well.

“For refugees fleeing war, there has to be some alternative to having to cross the Mediterranean in smugglers boats,” he continued. “We know that without realistic and substantial alternative channels for people to reach safety, the much-needed increase in international efforts to crack down on smugglers and traffickers is unlikely to be effective.”

The UN refugee agency has long been advocating for a comprehensive and urgent response from the European Union and has shared specific proposals including the establishment of a possible scheme to compensate shipping companies involved in rescuing people at sea, increasing credible legal alternatives to dangerous voyages and a pilot relocation programme for Syrians refugees arriving in Italy and Greece.

The UNHCR spokesperson voiced hope that the new EU measures announced this week, including a 10-point plan of action, would be “an important first step” towards a trans-national approach in confronting the migrant crisis.

At the same time, he warned that there needed to be “further elaboration” of what the new measures would mean for resettlement and relocation and the facilitating of access to international protection in Europe through other legal channels.

“Ultimately, the test will be whether we see a reduction in lives lost, effective access to protection in Europe without having to cross the Mediterranean, and an effective Common European Asylum System, which truly lives up to its commitments of solidarity and responsibility sharing,” Mr. Edwards declared. “UNHCR is stepping up our own response to this crisis. And we stand ready to work collaboratively with our European partners.”

“The decision to strengthen the capacity of transit countries to stop irregular migration on their territory, without offering long-term solutions and without adequate human rights guarantees, will only compound the abuse of migrants,” they said in a statement today.

“The question remains: what happens once those lives are rightfully saved? What will be done about the lack of proper individual assessments of one's protection needs, about the inadequate reception facilities and poor conditions for those rescued, about the lack of an agreed refugee resettlement policy, and about the forced returns of irregular migrants, which could also include potential victims of trafficking.”

The two UN experts called on the EU to “move beyond emergency mode” and on to pilot projects involving more comprehensive and innovative regulated avenues of mobility, including the establishment of a resettlement policy.

“Europe must bank on mobility across the Mediterranean and within its territory as a dynamic factor of economic and social development,” they concluded. “Only then will it be able to truly reclaim the control of its borders from criminal smuggling rings.” 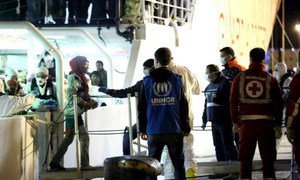