FAO/Olivier Asselin
Healthy soils are essential to food security and play a critical role in the carbon cycle.
20 April 2015

As Global Soil Week began in Berlin today, a United Nations agricultural agency official used his opening address to stress the significance of healthy soils to global food production and the importance of prioritizing soil health in public policy.

“If humanity’s overarching need for food security and nutrition, climate change mitigation and sustainable development is to be met, soil resources have to be given the global attention they deserve,” said Moujahed Achouri, Director of the Food and Agriculture Organization (FAO) Land and Water Division.

“Soils are essential for achieving food security and nutrition and have the potential to help mitigate the negative impacts of climate change.”

In addition to sustaining 95 per cent of food production, soils host more than a quarter of the planet’s biodiversity, are a major source of pharmaceuticals, and play a critical role in the carbon cycle, Mr. Achouri added.

He also pointed to an “alarming” level of soil degradation – estimated at 33 percent globally – saying the added pressures put on soils are reaching critical limits, with the potential to threaten food security and send many people into poverty.

Global Soil Week, which started in Berlin yesterday, brings together more than 550 participants from 78 countries working on sustainable soil management and land governance, and the FAO used the opportunity to call on the international soil community and policy makers to work together to reduce soil degradation and restore already degraded land because of the contribution that sustainable soil management can make to production of more and healthier food.

Global Soil Week 2015 coincides with the International Year of Soils, which aims to raise awareness about often-unrecognized benefits of soils to human health and sustainable development, and this year, the Week’s focus is on the need for including soil issues in the UN sustainable development goals (SDGs) that are currently being discussed.

♦ Receive daily updates directly in your inbox - Subscribe here to a topic.
♦ Download the UN News app for your iOS or Android devices.
soil|sustainable development

At end of International Year of Soils, UN chief appeals for reverse in rate of soil degradation 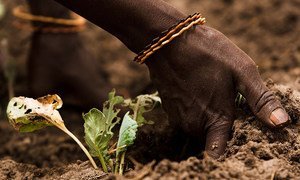 Healthy soils are the foundation for food, fuel, fibre and even medicine, said the United Nations Food and Agriculture Organization (FAO) as it kicked off the 2015 International Year of Soils today on the first-ever World Soil Day.