12 April 2015
Marking International Day of Human Space Flight, the United Nations today spotlighted the contribution of space science and technology to sustainable development and underscored the need to push the boundaries of exploration for the benefit of all people.

“I am confident that the International Day of Human Space Flight will remind us of our common humanity and our need to work together to conquer shared challenges,” Secretary-General Ban Ki-moon said on the Day marked worldwide on 12 April.

“I hope it will also inspire young people in particular to pursue their dreams and move the world towards new frontiers of knowledge and understanding," the UN chief added.

In 2011, the General Assembly declared 12 April International Day of Human Space Flight to reaffirm the important contribution of space science and technology in achieving sustainable development. The Assembly also expressed interest in promoting and expanding the exploration and use of outer space for peaceful purposes.

This day, 12 April back in 1961 was the date of the first human space flight, carried out by Yuri Gagarin, a Soviet citizen. This historic event opened the way for space exploration.

“Yuri Gagarin's journey as the first human in space 54 years ago has inspired us all to advance the boundaries of exploration”, said United Nations Office for Outer Space Affairs (UNOOSA) Director, Simonetta Di Pippo.

“Recording the messages of the many men and women who have travelled into space allows us to commemorate the role these people have played as Ambassadors for humankind,” said Ms. Di Pippo.

The new edition – available on UNOOSA's website in six different languages - contains messages from space explorers from France, Germany, Italy, Japan, and the United States. One of the featured explorers, Scott Kelly is currently on a one year mission aboard the International Space Station (ISS), which started on 28 March 2015.

The autograph album also contains a copy of the signed sheets received from 57 other space explorers from 20 nations, among which Valentina Tereskhova of Russia, the first woman in space, and Charles F. Bolden, the current NASA Administrator, and copy of the autographs of Yuri Gagarin, and Edward H. White, the first American to walk in space. 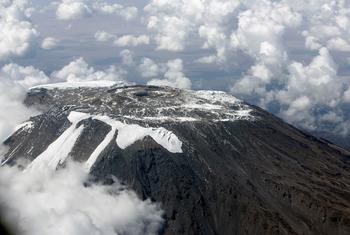 23 March 2015
With extreme weather and changing climatic patterns taking a heavier toll on the planet, mitigating and adapting to them remains “among the great tests of our time,” Secretary-General Ban Ki-moon said today, as he stressed the need for timely, reliable information to further strengthen resilience.