10 April 2015
United Nations Secretary-General Ban Ki-moon, in an address in Panama to the seventh Summit of the Americas, commended the hemisphere's commitment to peace, human rights and sustainable development, while urging leaders to continue to pursue a future of prosperity with equity, where no one is left behind.

United Nations Secretary-General Ban Ki-moon, in an address in Panama to the seventh Summit of the Americas, commended the hemisphere's commitment to peace, democracy, human rights and sustainable development, while urging leaders to continue to pursue a future of prosperity with equality, where no one is left behind.

“First, the region is upholding its status as a zone of peace. This is visible in your solidarity with countries in need and your growing engagement in United Nations peacekeeping activities,” Mr. Ban told participants.

“The Americas are overcoming long-standing divisions in historic ways as we see in this very room,” he added, pointing out that this is the first time all 35 Member States of the Americas are participating in the Summit.

The UN chief called the presence of President Raul Castro of Cuba an embodiment of “a goal long expressed by many” and commended both United States President Barack Obama and President Castro for initiating a normalization of bilateral relations.

“This is in line with the UN Charter's goal of promoting good neighbourly relations and with longstanding calls by a majority of UN Member States over so many years,” Mr. Ban said.

He also commended Colombia for its participation in peace talks taking place in Havana and expressed hope that the region will continue relying on dialogue to address differences -- both between and within states.

“Your region has been at the forefront in the adoption of regional instruments to protect and promote democracy and human rights,” Mr. Ban said, urging the momentum to continue.

Welcoming advances made in women's participation in political leadership, Mr. Ban said that prosperity and equity is possible only when all people, including women, are involved. While the Americas has the highest number of women serving as heads of state or government, and the highest percentage of women parliamentarians, more advances are needed, especially to end violence against women.

“We must also do more to ensure the effective inclusion of groups that have been historically marginalized, such as indigenous peoples and communities of African descent,” he added.

Young people are among the first and worst victims of the violence, insecurity and social conflict that still affect many areas. They are often victims to transnational organized crime, gang violence and drug trafficking. Countries must do more to address the illicit flows between drug-producing and drug-consuming countries, Mr. Ban said.

“I encourage you to make the most of next year's worldwide discussions on drugs during the UN General Assembly Special Session on drug issues in 2016,” he said.

Much of the Americas has made impressive progress in fighting poverty, the UN chief continuing

This is a year of passage,” the Secretary-General said, commending the strong contribution of the Americas in defining the post-2015 development agenda.

“The Americas have been at the vanguard of discussions on key issues regarding climate change,” he said. Caribbean nations, which are among the most vulnerable to the effects of climate change, have played a major role in placing this issue on the global agenda.

Earlier in the day, the Secretary-General addressed the CEO Summit of the Americas, saying that business has a key role in the success of several important international forums taking place in 2015 and will be deeply involved in the implementation of their outcomes.

“The new global development agenda and the battle against climate change will need resources, technology and capacity,” he told business leaders who gathered in Panama City. “Private sources and partnerships will be crucial.”

He spoke of the UN Global Compact set up following the Millennium Declaration between business and society, saying that results from the Compact's first 15 years showed that engagement of all key stakeholders in issues of common importance resulted in progress.

There is growing realization of the link between business health and the health of societies, the Secretary-General said, pointing to corporate social responsibility initiatives, investors' moves away from fossil fuels, and increasing minimum wages around the world.

“Social and environmental responsibility is becoming mainstream, and is increasingly a standard part of strategic corporate practice,” he said. “This is changing markets from within – and for the better. We have to build on this momentum, and bring on board those companies still doing business that puts profit before progress.”

“With business support for implementing the sustainable development goals, we can transform our world,” he said. “Our Global Compact now has over 8,000 companies and 4,000 non-business organizations participating, with Local Networks in 86 countries – including many in Latin America.”

Business is part of the solution to several major global challenges and he thanked the assembled leaders for their part in trying to make 2015 a historic year. Companies should communicate and support the sustainable development goals, help with implementation of the post-2015 development agenda, mobilize financing for development and help the international community to reach a meaningful universal agreement on climate action in Paris.

“The world needs companies and investors everywhere to do their part in meeting the needs of people today while transforming our prospects for tomorrow,” Mr. Ban said. 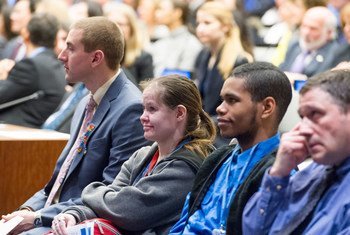 2 April 2015
At a special event at United Nations Headquarters to mark World Autism Awareness Day, Secretary-General Ban Ki-moon called today for greater access and work opportunities for persons with autism, saying that while much progress had been made, much more work was needed.