The humanitarian situation in Yemen is “getting worse by the hour,” the United Nations Humanitarian Coordinator for the country warned today, saying that the escalating conflict has put millions of people at risk of physical injury or death.

“We should not forget that the current conflict in Yemen takes place against the backdrop of a humanitarian crisis of a protracted nature and of a size and a complexity which is amongst the largest in the world,” Johannes van der Klaauw told the press in Geneva.

“This current conflict has aggravated the situation and has made the population increasingly vulnerable,” he added.

The ground attacks and airstrikes are quickly unravelling “anything there was left” of basic services including health care, safe water and availability of food.

Even before the latest escalation of the conflict, 16 of the 25 million Yemenis required humanitarian assistance to meet their most basic needs.

“Ordinary Yemeni families are struggling to access health care, water, food and fuel –commodities that are basic requirements for their survival,” the Humanitarian Coordinator said.

Schools, hospitals, markets, power plants and warehouses have been damaged. Shortages of food and fuel are being reported across the country. Many areas in the country are also experiencing frequent power cuts, and shortages of water and fuel. In the city of Aden, one million people risk being cut off from access to clean drinking water within a matter of days.

“We do our utmost to deliver life-saving assistance and protection services, to the extent possible,” Mr. van der Klaauw said.

Thus far, humanitarian partners have provided medical supplies and trauma kits for 18 hospitals throughout Yemen but at great risk. Three Yemeni aid workers have recently been killed in crossfire in Aden while trying to save lives.

The Humanitarian Coordinator urged all parties to the conflict to ensure that civilians are protected.

“We must be able, as aid workers, to safely deliver this life-saving assistance in all affected areas in Yemen. To this end, I have been calling, and doing it again this morning, on all the parties for an immediate humanitarian pause in this conflict,” he said.

At the same press conference, several UN agencies briefed journalists on the situation in Yemen regarding health facilities, the status of refugees, children and food security. Ahmed Shadoul from the World Health Organization (WHO), via the telephone from Jordan, said that according to the latest figures, at least 648 people had been killed and 2,191 people had been injured since the fighting in Yemen has escalated in recent weeks. WHO has appealed that all parties to the conflict to keep health facilities safe. With a shortage of medical equipment and teams, WHO is doing its best to provide more than 20 hospitals with supplies but the fuel shortages remains a major problem.

Adrian Edwards, for the UN Refugee Agency (UNHCR), reported a rise in people fleeing by boat across the Gulf of Aden to countries in the Horn of Africa – historically a major route travelled by refugees and migrants headed in the opposite direction. The announced that it is making plans to be able to receive up to 30,000 refugees in Djibouti over the next six months and up to 100,000 people in Somaliland and Puntland, Somalia. Inside Yemen, UNHCR's operations to protect and assist the 250,000 refugees continue where possible.

Meanwhile, the UN Children's Fund (UNICEF) said that the conflict continues to exact a heavy toll on children. Thousands of families across the country had left their homes in search of safer places and hospitals and are under increasing pressure as they struggle to manage mass casualties with little supplies. Reinforcements brought in today could make the difference between life and death for children and their families, but they were not enough and UNICEF plans more airlifts.

The conflict is also threatening the country's already fragile food security, the World Food Programme (WFP) warned, expressing alarm that food and fuel shortages could push even more people into hunger in a country where more than 10 million people are already suffering from food insecurity. WFP is continuing to work where through its 185 national staff and its partners to reach those most in need. Despite security challenges, the Programme and its partners distributed food assistance last week to nearly 30,000 internally displaced people. 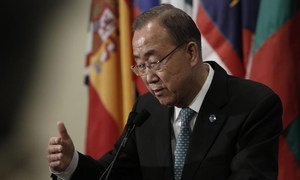 Countless civilians are being “willfully abandoned to misery” in Yemen, amid a rapidly deteriorating security and humanitarian crises inflamed by a escalating violence, Secretary-General Ban Ki-moon told reporters at United Nations Headquarters today.