Countless civilians are being “willfully abandoned to misery” in Yemen, amid a rapidly deteriorating security and humanitarian crises inflamed by a escalating violence, Secretary-General Ban Ki-moon told reporters at United Nations Headquarters today.

“The crisis has only multiplied in recent days,” Mr. Ban, said. “Ordinary Yemeni families are struggling for the very basics – water, food, fuel and medicine. Hundreds of civilians have been killed. Hospitals and schools are shutting down – some of which are direct targets of the fighting.”

The situation in Yemen has been rapidly deteriorating since the country formed a new Government in November 2014 aimed at ending a period of political turbulence and bringing about a full transition towards democracy. The country continued to be plagued by violence and political demonstrations despite UN efforts to bring about a peaceful political resolution. Recent weeks have seen a steady ratcheting up of fighting between the Government and Houthi militias.

“Even before the latest crisis, Yemen's overall humanitarian needs were on a scale similar to all nine countries of the Sahel region – combined. And Yemen had almost double the number of people classified as severely food insecure,” the Secretary-General added.

Attempts by the Houthis and their allies to take territory by force and undermine the authority of the legitimate government are in clear violation of Security Council resolutions and their commitments in the UN-facilitated political process, the UN chief reiterated.

Since the initial advances by the Houthis, the situation has greatly escalated through the Arab coalition military operation led by Saudi Arabia at the request of the Yemeni President. Coalition air raids and continuing attempts by the Houthis and their allied armed groups to expand their power have turned an internal political crisis into a violent conflict that risks long-lasting regional repercussions.

“The last thing the region and our world need is more of the chaos and crimes we have seen in Libya and Syria,” Mr. Ban said, stressing that UN-brokered negotiations, endorsed by the Security Council, remain the “best chance to help get the transition back on track” and preserve the country's unity and territorial integrity.

For over two months, the Secretary-General's Special Envoy Jamal Benomar has facilitated all-inclusive negotiations. Although disagreements remain on some critical issues, many others had been resolved.

“There needs to be a return to political negotiations. All parties to those negotiations must participate in good faith. There is no other solution,” Mr. Ban said.

All parties to the conflict in Yemen must adhere to their obligations under international humanitarian law, the UN Chief urged, as he called on all those involved in the fighting to protect civilians and enable humanitarian workers to safely deliver life-saving assistance to people in need.

“I expect Member States to do everything possible to make this happen and get the parties back to the peace table without conditions and without delay,” Mr. Ban emphasized.

Also today, Mr. Ban's Special Advisers on the Prevention of Genocide, Adama Dieng, and on the Responsibility to Protect, Jennifer Welsh, expressed alarm at the impact military operations were having on the civilian population.

“The region is facing a critical moment,” they said in a statement. “We call on all parties involved in the crisis, including decision-makers, political parties and groups, military, religious, tribal and community leaders, to take all possible measures to prevent sectarian reprisals amid the ongoing violence, to engage constructively in peace initiatives, and to promote respect for diversity.”

The Special Advisers expressed shock that protected groups, such as health workers, and civilian objects, such as medical and education facilities and private homes, have been hit by indiscriminate attacks in the course of the fighting. They also deplored the number of casualties since the escalation of violence.

Special Advisers Dieng and Welsh noted with concern that sectarian tensions are increasing in Yemen, as demonstrated by media reports of calls by religion leaders in the Aden Governorate on 8 April for followers to engage in a holy war, and by the 20 March bomb attacks at two mosques.

♦ Receive daily updates directly in your inbox - Subscribe here to a topic.
♦ Download the UN News app for your iOS or Android devices.
Yemen|palestin 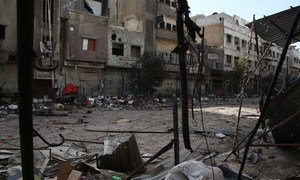 The situation in the Palestinian refugee camp of Yarmouk remains extremely tense amid continued street fighting and unconfirmed reports of aerial bombardments of civilian areas, the United Nations said today.