UNICEF Yemen
The increasing violence in Yemen is taking an intolerable toll on children.
8 April 2015

The United Nations expert on the human rights of internally displaced persons today urged the international community “to prepare for massive displacement and humanitarian crisis as conflict torn Yemen further descends into chaos and civilians flee the fighting.”

“The international community must prepare for a worst case scenario. While efforts to reach a diplomatic solution are essential, the picture on the ground is extremely bleak and humanitarian responses must be stepped up as a matter of urgency,” UN Special Rapporteur Chaloka Beyani warned in a news release from Geneva.

“Unless rapidly resolved, the crisis could lead to mass displacement in the wake of heavy and ongoing fighting and airstrikes,” he added.

Over the last two weeks of increased fighting, more than 540 people have been killed, of which 311 are civilians, including 77 children, according to UN humanitarian agencies. At least 513 civilians have been injured, and more than 100,000 have been displaced.

On 30 March, an airstrike carried out against the Al-Mazraq camp, home to over 4,000 internally displaced people (IDPs) in Hajjah Governorate, northern Yemen, led to the deaths of 25, with 37 others injured, including 12 children. The UN expert condemned the attack and described it as “a grave violation against some of the most vulnerable of the vulnerable civilians.”

In addition to the IDP camp, reports have indicated that numerous hospitals, schools and other civilian buildings have been damaged by airstrikes and power and water supply cuts. Thousands of people are in an extremely vulnerable situation having been forced to flee their homes in areas where fighting has become intense and spread to residential neighbourhoods.

“Those responsible for violations of international humanitarian and human rights law, including the indiscriminate targeting of civilians, must be held accountable,” the Special Rapporteur stressed.

The Special Rapporteur joined humanitarian actors, including the UN Humanitarian Coordinator in Yemen, Johannes van Der Klaauw, in calling on all parties to allow unhindered access to civilians by humanitarian actors. He underscored that IDPs must be protected against direct or indiscriminate attacks or acts of violence and attacks against their camps or settlements.

“While the scale of internal displacement remains unclear at this stage, it is certain to grow significantly over the coming days and weeks, as clashes continue to take place,” Mr Beyani said. A total of 14 Governorates out of 22 have been affected by airstrikes or armed conflict.

Special Rapporteurs are part of the Human Rights Council’s independent fact-finding and monitoring mechanisms that address either specific country situations in all parts of the world. They do not receive a salary for their work and are independent from any government.

Meanwhile, UNICEF Yemen Representative Julien Harneis has warned that yesterday’s airstrike on Al Rasheedi school in Yemen’s Ibb governorate, which left at least two children dead and two injured, “is a stark reminder of the appalling risks facing children as the conflict in Yemen intensifies.”

“Such incidents underline the urgent need for all parties to find a peaceful resolution to the conflict, and for every effort to be made to protect children from violence. That includes affording special protection to schools and hospitals, which should always be places where children can feel safe and not face the risks of death or injury.”

Also today, the Secretary-General’s spokesperson, Stéphane Dujarric, updated the press at Headquarters on how UN agencies were coping with the increasingly dire humanitarian situation in Yemen.

He said that the World Health Organization (WHO) has reported that ambulances in Aden are unable to reach injured people in some of the affected districts earlier this week. Meanwhile, the UN Children’s Fund (UNICEF) called yesterday’s airstrike on the Al Rasheedi school in Yemen’s Ibb governorate, which left at least two children dead and two others injured, a stark reminder of the appalling risks faced by children as the conflict intensifies.

The head of the Office for the Coordination of Humanitarian Affairs (OCHA) Office for Yemen, Trond Jensen, has expressed the humanitarian community's concern that the situation could turn catastrophic. He appealed to all parties to the conflict to respect their obligations under international law, to respect civilians and civilian infrastructure, and to allow unfettered access for humanitarian supplies and workers, so that urgently needed supplies can be brought in.

National aid partners in Yemen are expected to conduct needs assessments in the coming days, including in Hajjah, Al Hudaydah, Aden, Al Dhale’e, Lahj and Abyan. Discussions also continue with authorities to allow partners to undertake a humanitarian needs assessment in Sa’ada. 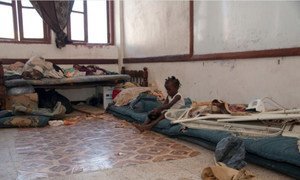 Amid ongoing heavy fighting in Yemen, the United Nations Office for the Coordination of Humanitarian Affairs (OCHA) says that a plane carrying humanitarian staff landed yesterday in the capital, Sana’a, and two more planes carrying medical supplies are expected later this week.