Stakeholders must work together to take Libya out of its “mess of a war” and begin rebuilding the conflict-ridden country into a modern, democratic state, a senior United Nations official said today.

Speaking to the press following a series of meetings with Libyan officials, the Secretary-General’s Special Representative and head of the UN Support Mission in Libya (UNSMIL), Bernardino Léon, said that the time had come to transition from aspirations for a peaceful Libya to “real achievements,” adding that the international community was prepared to help Libyans with humanitarian assistance.

“We need you to tell us concretely what the needs are and how we can work together,” Mr. Léon recounted in his remarks to reporters in Brussels. “It is not going to be easy in some cases, but militias have to understand that they cannot take the country hostage forever. They have to leave room for the lives of the citizens to start again – for the normal life to come back.”

The meeting brought together representatives of Libyan municipalities and local councils and included Federica Mogherini, the High Representative of the European Union for Foreign Affairs and Security Policy, as part of a “five track” UN-facilitated dialogue process aimed at bringing peace and stability to Libya.

The other four tracks, according to UNSMIL, include dialogues with tribal leaders, political parties, militias and armed groups, and the army and are currently ongoing.

Mr. Léon explained that among the challenges facing both Libyan stakeholders and the international community was how to reduce the fighting in the North African country in order to begin delivery of critical humanitarian aid.

At the same time, he said, the resurgence of terrorism in the country remained “a very serious threat” for Libya and he urged all national actors to “send a very strong message” against any and all terrorist groups operating inside the country.

Above all, the Special Representative noted that UNSMIL was prepared to advance a proposal that “might be the basis for the future governance of Libya” and would comprise the formation of a council of municipalities as one of several “key institutions” in a post-conflict Libya. 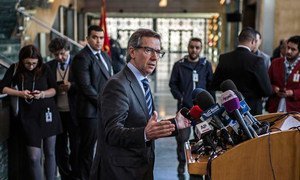 Negotiations between Libyan parties are entering a “decisive round” as continued fighting and the menace of terrorism cast a sense of urgency to the United Nations-facilitated talks, a senior official for the Organization said today.