Emma Beals/IRIN
The Baharka camp, 5km north of Erbil in northern Iraq, is home to thousands of internally displaced people (IDPs) following the takeover of large swathes of the country by the Islamic State of Iraq and the Levant (ISIL).

19 March 2015
A report released today by the United Nations human rights office says that the so-called Islamic State in Iraq and the Levant (ISIL) may have committed genocide, war crimes and crimes against humanity in its attacks against ethnic and religious groups in the country.

The report found widespread abuses committed by ISIL that may amount to war crimes, crimes against humanity and genocide, according to a news release issued by the Office of the High Commissioner for Human Rights (OHCHR).

Compiled by investigators sent to the region last year by the High Commissioner, the report highlights violations, including killings, torture, rape and sexual slavery, forced religious conversions and the conscription of children.

ISIL’s attacks on the Yezidi population “pointed to the intent of ISIL to destroy the Yezidi as a group,” the report says, which “strongly suggests” that ISIL may have perpetrated genocide.

The report also highlights violations carried out by the Iraqi Security Forces and associated militia groups, including killings, torture and abductions, with some incidents pointing, at the very least, to a failure by the Government to protect persons under its jurisdiction.

More than 100 people who witnessed or survived attacks in Iraq between June 2014 and February 2015 helped the investigation team compile its report, which cites brutal and targeted killings of hundreds of Yezidi men and boys in the Ninewa plains in August 2014.

Yezidi populations rounded up, with men and boys over the age of 14 separated from the women and girls. The males were led away and shot by ISIL, while the women were abducted as the ‘spoils of war.’ “In some instances,” the report found, “villages were entirely emptied of their Yezidi population.”

Yezidi female escapees described being openly sold or handed over as “gifts” to ISIL fighters. Witnesses described rapes of girls as young as six and nine years old and a scene where ISIL members sat laughing as two teenage girls were raped in the next room.

Boys between the ages of eight and 15 also described horrific experiences, as they were separated from their mothers, transported to locations in Iraq and Syria and forced to convert to Islam. They were subjected to religious and military training, including how to shoot guns and fire rockets, and were forced to watch beheadings.

“This is your initiation into jihad,” one boy was told. “You are an Islamic State boy now.”

Christians, Kaka’e, Kurds, Sabea-Mandeans, Shi’a and Turkmen also suffered brutal treatment at ISIL’s hands, the report says, citing the thousands of Christians uprooted from their homes in June last year, when ISIL ordered them to choose between conversion, taxation or displacement, and the 600, mostly Shi’a prisoners who were massacred by ISIL members.

An Iraqi Government investigation into that incident and another into an ISIL massacre of over 1,500 cadets from Speicher army base have yet to reveal their conclusions publicly, the report notes, calling for investigations into all crimes detailed in the report, including those alleged to have been committed by Government forces.

Numerous sources told the investigation team that Iraqi Security Forces and affiliated militia had also committed serious human rights violations during their counter-offensive operations against ISIL, operating “with total impunity, leaving a trail of death and destruction in their wake.”

Retreating Iraqi forces allegedly set fire to an army base in Sinsil, where several dozen Sunni prisoners were held, and in another incident, at least 43 prisoners were allegedly shot dead in the al-Wahda police station in Diyala. Villagers reported being rounded up and taken to al-Bakr airbase at Salah-ad-Din where, the report says, torture is allegedly routine.

As one witness put it: “we hoped for the best when the Iraqi army and the ‘volunteers’ liberated the area from ISIL. Instead…they pillaged, burnt and blew up houses, claiming that all villagers are part of ISIL. This is not true; we are just ordinary poor people.”

The report urges the Government to become a party to the Rome Statute of the International Criminal Court and ensure that international crimes defined in that Statute are criminalised under domestic law.

It also calls on the Human Rights Council to urge the UN Security Council to address, “in the strongest terms, information that points to genocide, crimes against humanity and war crimes,” and to consider referring the situation in Iraq to the International Criminal Court. 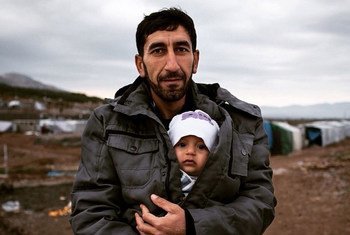 17 March 2015
A culture of impunity continues to flourish inside Syria amid a conflict that has generated over four million refugees and hundreds of thousands of dead, the head of a United Nations-mandated Commission of Inquiry said today, urging the international community to step up efforts in bringing the four-year-long war to a close.