3 March 2015
The United Nations Security Council unanimously adopted a resolution today creating a system by which it would to impose sanctions on those blocking peace in South Sudan, the 15-member body’s latest step towards ending a conflict that has killed thousands in the world's newest country.

According to the text, the Council endorsed the Cessation of Hostilities Agreements accepted and signed by both the Governments of South Sudan and the Sudan Peoples’ Liberation Movement (SPLM)-in Opposition on 23 January 2014, 6 May 2014 and 9 May 2014.

Reiterating that there is no military solution to the conflict, the Council demanded that all parties adhere to and immediately implement the cessation of hostilities agreements, “including the progressive withdrawal of foreign forces deployed in South Sudan since 15 December 2013,” and, among other terms, demanded that the parties commit to finding a comprehensive agreement without further delay.

The resolution also expressed deep concern at the “failures” of both parties to engage in a palpable peace process which would lead to political resolve and bring an end to the violence. The text underscored its “willingness to impose targeted sanctions in order to support the search for peace.”

While no listings were made, the resolution sets out a series of listing criteria. The sanctions are expected to apply to those responsible for, complicit in, or engaged directly or indirectly in actions or policies threatening the peace, security or stability of South Sudan.

These actions or policies apply but are not limited to those expanding or extending the conflict or obstructing reconciliation and peace talks or processes, threatening transitional agreements or undermining the political process and planning, directing or committing acts that violate applicable international humanitarian and human rights law and human rights abuses.

The resolution, drafted by the United States, also applies to those targeting civilians or attacking hospitals, religious sites, schools or locations where civilians seek refuge and recruiting or using children by armed forces or groups. In addition, those obstructing the work of international peacekeeping, diplomatic or humanitarian missions or hindering the delivery and distribution of humanitarian aid or access to such aid also apply.

To assist the relevant Sanctions Committee in its work, the Council requested the Secretary-General to set up a five-member panel of experts to provide information relevant to the potential designation of individuals and entities. Renewal of the panel’s mandate would be considered no later than 2 March 2016. Among other responsibilities, the panel will collect and analyse information regarding the flow of arms and related military assistance to those undermining the peace process and committing violations of international humanitarian and human rights law.

The security situation in South Sudan has deteriorated steadily over the past year since political in-fighting between South Sudan's President Salva Kiir and his former Vice-President, Riek Machar and their respective factions erupted in December 2013. The hostilities subsequently turned into a full-fledged conflict that has sent nearly 100,000 civilians fleeing to bases around the country managed by the UN Missions (UNMISS). 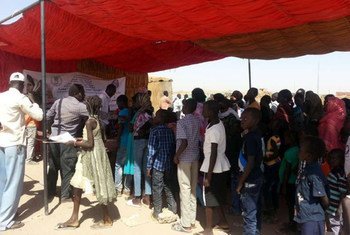 3 March 2015
Under a United Nations-backed initiative, South Sudanese people living in Sudan are being registered by the Government of Sudan and issued identity cards that give them the right to work and access to basic services.