21 February 2015
Mother tongue education is not only a force for quality learning, it is also essential to bolster multilingualism and respect for linguistic and cultural diversity at a time when societies are transforming quickly and many languages are under threat, the United Nations agency mandated with promoting education said today.

Marking International Mother Language Day , celebrated annually on 21 February, the head of UN Educational, Scientific and Cultural Organization (UNESCO), emphasized that the post-2015 development agenda must focus on advancing quality education for all and that includes promoting the preservation of language.

"2015 marks the 15th anniversary of International Mother Language Day – this is also a turning point year for the international community, as the deadline for the Millennium Development Goals, when countries will define a new global sustainable development agenda,” UNSECO Director-General Ms. Irina Bokova said in a statement.

“Education in the mother language is an essential part of achieving these goals – to facilitate learning and to bolster skills in reading, writing and mathematics,” she added, noting that taking this forward will require a sharper focus on teaching training, revisions of academic programmes and the creation of suitable learning environments.

More than 50 per cent of the approximately 7,000 languages spoken in the world are likely to die out within a few generations, and 96 per cent of these languages are spoken by a mere 4 per cent of the world's population, according to UNESCO. Only a few hundred languages have genuinely been given a place in education systems and the public domain, and less than a hundred are used in the digital world.

“International Mother Language Day is a moment for all of us to raise the flag for the importance of mother tongue to all educational efforts, to enhance the quality of learning and to reach the unreached. Every girl and boy, every woman and man must have the tools to participate fully in the lives of their societies – this is a basic human right and it is a force for the sustainability of all development,” Ms. Bokova said.

Through its programmes worldwide, namely its 'Education for All' initiative, UNESCO aims to promote inclusive education through bilingual intercultural approaches, in order to include both native and non-native cultures. In Thailand, for example, UNESCO is working to deepen understandings of multilingual education based on the mother tongue.

International Mother Language Day has been observed every year since February 2000 to promote linguistic and cultural diversity and multilingualism. The date –proclaimed by UNESCO in 1999 –represents the day in 1952 when students demonstrating for recognition of their language, Bangla, as one of the two national languages of the then Pakistan, were shot and killed by police.

Languages with their unique ability for communication, social integration, education and development, are of strategic importance for people and planet. Yet, due to globalization processes, they are increasingly under threat, or disappearing altogether.

According to UNESCO, when languages fade, so does the world's rich tapestry of cultural diversity. Opportunities, traditions, memory, unique modes of thinking and expression — valuable resources for ensuring a better future — are also lost. 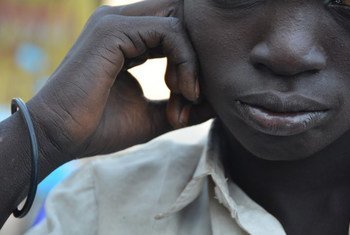 On International Day, UN demands end to use of child soldiers in conflict

12 February 2015
From Afghanistan to the Democratic Republic of the Congo (DRC), as the world's conflicts become more brutal, intense and widespread, children are finding themselves increasingly vulnerable to recruitment and deployment by armed groups, the United Nations warned today.