United Nations High Commissioner for Human Rights Zeid Ra’ad Al Hussein today condemned the latest attack against people with albinism in Tanzania that took the form of the “horrific murder and mutilation” of an albino baby and demanded such “terrible” crimes be halted.

“Attacks against people with albinism, which are often motivated by the use of body parts for ritual purposes, have claimed the lives of at least 75 people in Tanzania since 2000 and seem to be on the rise, with at least three incidents over the past two months,” the top UN rights official said in a statement.

Mr. Zeid’s statement came in response to the “horrific murder and mutilation of Yohana Bahati, a one-year-old baby with albinism, in Northern Tanzania.”

He said on Sunday, Yohana was kidnapped from his home by five unidentified men armed with machetes and his mother was badly injured, and his body was found on 17 February, with his arms and legs chopped off.

“Violence and discrimination against people with albinism must be halted,” Mr. Zeid said. “I call on the Tanzanian authorities to swiftly investigate and prosecute perpetrators of this terrible crime and to strengthen its protection measures for people with albinism, particularly in the lead up to general elections in the country.”

His statement comes a day after the top UN official in Tanzania, UN Resident Coordinator Alvaro Rodriguez, expressed concern at the recent abductions of baby boy Yohana and another albino child named Pendo, who has been missing since December. Despite the Government’s efforts, Pendo has not been found. 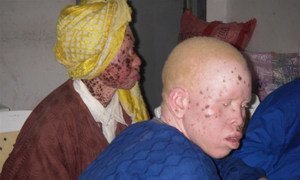 The barbaric murder of a woman with albinism in Tanzania has prompted the United Nations human rights chief to call for greater protection for this “exceptionally vulnerable” community.