© UNHCR/Georgina Goodwin
UN Refugees Chief Filippo Grandi talks with a woman and her baby from the refugee community during his official visit to Nyarugusu Refugee Camp in Kasulu District, western Tanzania, February 7, 2019.
8 February 2019
Migrants and Refugees

The head of the UN Refugee Agency (UNHCR) has praised Tanzania for the long-standing welcome it offers hundreds of thousands of refugees, describing it as a “regional peacemaker” in an unstable part of Africa, that deserves more international support.

Speaking at the end of a four-day visit to the east African nation, Filippo Grandi called for greater investment in the north-west region of Tanzania, where some 300,000 refugees are being hosted, and pledged to mobilize more support for humanitarian efforts, local community development, improved camp security, and environmental projects.

In a meeting with Tanzanian President John Joseph Magafuli, Mr. Grandi commended the country’s tradition of welcoming refugees fleeing conflict and persecution in neighbouring countries, and said Tanzania deserved greater international recognition for its role as “one of the most important refugee asylum countries in Africa.”

However, Mr. Grandi also impressed upon government officials the importance of not forcing refugees to go back to their countries of origin. Over 57,000 refugees from Burundi have been assisted to voluntarily leave Tanzania and return home in the last two years, but some refugees report their decision was partly based on perceived pressure from the authorities, restrictions on freedom of movement and a lack of access to jobs, so they can support themselves.

“It is important that nobody is forced back, that repatriation remains a voluntary exercise,” Mr. Grandi told reporters, after visiting the Nyarugusu Refugee Camp in Kasulu, home to around 15,000 Burundian and Congolese refugees. He noted that some refugees are volunteering to go back to their countries of origin, despite uncertain conditions in both the Democratic Republic of Congo (DRC) and Burundi, and said that sustainable refugee return happens when refugees feel confident that it is safe to go back, and receive the necessary support to do so. Nearly three-quarters of Tanzania’s refugees are from Burundi, and the other 26 per cent are from the Democratic Republic of the Congo, or DRC.

♦ Receive daily updates directly in your inbox - Subscribe here to a topic.
♦ Download the UN News app for your iOS or Android devices.
Tanzania|DRC|Burundi 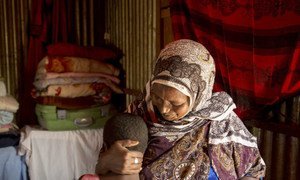 Female genital mutilation, is “an abhorrent human rights violation” still affecting women and girls around the globe, UN Secretary-General Antonio Guterres stated in his message for the International Day of Zero Tolerance for FGM, marked on Wednesday. 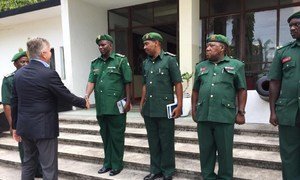 A year on from the brutal killings of 15 United Nations peacekeepers from Tanzania in the Democratic Republic of the Congo (DRC), the head of Peacekeeping Operations (DPKO) paid a visit to some of the victims’ families on Friday, to honour the memory of the soldiers who died in what was the biggest single loss of ‘blue helmets’ in recent history.