The United Nations agricultural agency has today announced the launch of a new technology that will allow quick identification of species of the fish while better helping to protect endangered shark species and to combat illegal trade in shark fins.

“The target users are port inspectors, customs agents, customs officers and also fish traders,” said Monica Barone, who led a team in the Fisheries and Aquaculture Department of the Food and Agriculture Organization (FAO) in developing the software. “People with or without training. And the ultimate goal is identification of fins for protecting species.”

The software, called iSharkFin, allows people without formal taxonomic training to identify different species of shark by uploading photographs. The user then chooses several key points of the fin shape along with identifying a few other characteristics, and an algorithm compares the information with iSharkFin's memory bank and identifies the shark species.

So far, the software, which has been in development since 2013, when five shark species were added to the Convention on International Trade in Endangered Species of Wild Fauna and Flora (CITES), can identify 35 shark species from their dorsal fins – the iconic one atop the animal's spine - and seven from just the pectoral fins underneath.

Many of those species are the ones most frequently traded internationally and use of the software may allow authorities to crack a long-running mystery over the actual magnitude of global shark fishing.

Currently, estimates of the number of sharks killed each year vary enormously, with one study suggesting the annual figure could be above 73 million, or more than six per cent of the total stock. If true, that would exceed the rate considered sustainable, as sharks take a long time to mature and produce few offspring. The number would also be four times higher than the FAO's estimates, which are based on official production statistics.

The gap in estimates is often blamed on 'shark finning', a practice involving slashing off a shark's fins and dumping the animal back into the sea. Many nations have declared shark finning illegal and insist that shark fins may be traded only if the whole carcass is brought to shore.

“The tool is important to improving shark statistics in the world,” said Barone, adding that it will benefit enforcement of protection of species.

The challenges of effective management in high seas areas, including responsible fishing and conservation of species at risk, are being discussed this week at a high-level workshop at FAO. 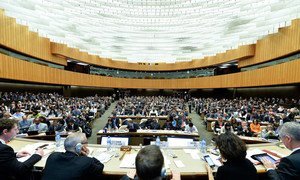 A key milestone on the route to a new, universal agreement on climate change was reached today in Geneva, with a week of United Nations-facilitated discussions among over 190 States ending with successful conclusion of the negotiating text for a binding treaty expected to be adopted in Paris at the end of this year.