13 February 2015
A key milestone on the route to a new, universal agreement on climate change was reached today in Geneva, with a week of United Nations-facilitated discussions among over 190 States ending with successful conclusion of the negotiating text for a binding treaty expected to be adopted in Paris at the end of this year.

“This fulfils the internationally-accepted timetable for reaching a possible treaty because it alerts capitals to the fact that a legal instrument could be adopted in Paris,” said Christiana Figueres, Executive Secretary of the UN Framework on Climate Change (UNFCCC) in a press release.

“It does not, however, set this possibility in stone – it merely opens the door for this possibility. As for the legal nature of the agreement, this will only be clarified later in the year.”

Successful construction of the negotiating text kick-starts a year of intense negotiations towards the new agreement, expected to be finalized at a Paris Conference of Parties to the UNFCCC in December. The Geneva talks gave 194 countries a chance to follow-up on the work done at the Lima Climate Change Conference held at the end of last year, which produced elements for the negotiating text, known as the Lima Call for Climate Action.

The text agrees today covers the substantive content of the new agreement including mitigation, adaptation, finance, technology and capacity-building. Countries worked hard to identify the main choices, put their views forward and add more sharpened options to the text.

“The text was constructed in full transparency. This means that although it has become longer, countries are now fully aware of each other’s positions,” Ms. Figueres said. “I am extremely encouraged by the constructive spirit and the speed at which negotiators have worked during the past week.”

The next step is for negotiators to narrow down options and reach consensus on the content. Formal work and negotiations on the text will continue at the Climate Change Conference in Bonn in June with two further formal sessions planned for later in the year, as well as ministerial-level meetings that will take place throughout 2015.

“These opportunities will help to ensure that countries have opportunities to work with each other at several political levels–what is needed now is vertical integration so that the views of heads of state, through ministers and to negotiators reflects a seamless and consistent view of ambition, common ground and ultimately success in December,” Ms. Figueres said.

The negotiating text is available on the UNFCCC’s website and will be edited and translated into the UN’s official languages. After this, the text will be communicated to the world’s capitals by the UNFCCC secretariat in the first quarter of 2015. 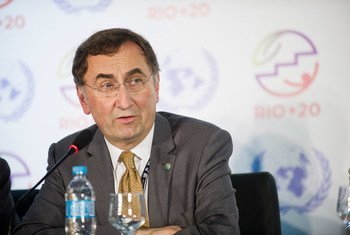