UN Photo/CIJ-ICJ/Frank van Beek
Meeting in The Hague on 3 February 2015, the International Court of Justice (ICJ) dismissed genocide claims by Croatia and Serbia.

3 February 2015
The International Court of Justice (ICJ), the main judicial body of the United Nations, today rejected claims made by Croatia and Serbia accusing each other of committing genocide during the Balkan wars of the 1990s, a decision that is “without appeal” and binding.

On July 2, 1999, Croatia filed an application instituting proceedings against the Federal Republic of Yugoslavia in respect of a dispute concerning alleged violations of the Genocide Convention committed between 1991 and 1995. On 18 November 2008, the Court delivered a Judgment partially rejecting the preliminary objections raised by the respondent (which had then become Serbia). Serbia subsequently filed a counter-claim.

According to the Convention on the Prevention and Punishment of the Crime of Genocide , genocide contains two constituent elements: the physical element or what the Court calls, actus reus, and the mental element. The “intent to destroy, in whole or in part, a national, ethnical, racial or religious group as such” is the essential characteristic of genocide, which it distinguishes from other crimes. It is regarded as a dolus specialis, meaning specific intent, which must be present to establish genocide.

Established in 1945 under the UN Charter, the ICJ – widely referred to as the 'World Court' – settles legal disputes between States and gives advisory opinions on legal questions that have been referred to it by authorized UN organs or specialized agencies. ICJ Judgments are final and binding on the Parties involved in the legal disputes submitted to the Court. 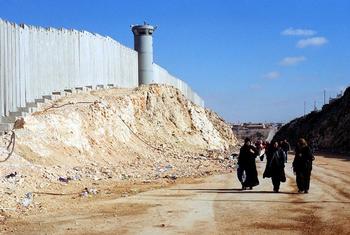 9 July 2014
At a special meeting to mark the 10th anniversary of the International Court of Justice (ICJ) advisory ruling declaring illegal Israel’s construction of a separation wall in the West Bank, Secretary General Ban Ki-moon today called for a halt to the current violence between Israelis and Palestinians, while also the need all Member States to comply with international law.