UNICEF/Roger Lemoyne
A boy rests against a woman in a camp of people displaced from Srebrenica, at the Tuzla airport in Bosnia and Herzegovina, 1995.

The Republika Srpska National Assembly in Bosnia and Herzegovina drew concern from the top United Nations expert on the Prevention of Genocide on Thursday, over its decision this week to revoke its endorsement of the 2004 Srebrenica Commission Report acknowledging genocide during the Bosnian war of the 1990s.

“Rejection of the Commission’s findings is a step backwards for Bosnia and Herzegovina,” said Special Adviser Adama Dieng.

“It undermines the rule of law and national and international efforts to achieve justice for victims of crimes committed against people of all ethnicities during the 1992-1995 Bosnian war,” he continued.

The war, which killed some 100,000 people, was settled through the Dayton Agreement, brokered in the US city of that same name, which split the former Yugoslav territory into two semi-autonomous ethnic regions divided between Bosnian Muslims and Croats, and Bosnian Serbs.

The Commission, which was set up in 2003 by the Republika Srpska Government, found that from 10 to 19 July 1995, between 7,000 and 8,000 Bosnian Muslims went missing in Srebrenica, and that more than 1,000 Bosnian Muslims were killed – constituting a serious violation of international humanitarian law.

According to news reports, the vote on Tuesday was initiated by Srpska Republika President Milorad Dodik ahead of October elections to mobilize voters around the nationalist agenda.

“Given the timing of this decision,” Mr. Dieng pointed out “it is likely to exacerbate tensions ahead of the 7 October elections and damage prospects for long term stability and reconciliation.”

Many of the Commission’s findings have been verified and confirmed by the verdicts of international, domestic and foreign courts.

The International Court of Justice and the International Criminal Tribunal for the former Yugoslavia have determined that the massacre of Bosnian Muslims in Srebrenica constituted genocide.

In July 1995, a Tribunal Judge described the aftermath as "scenes from hell, written on the darkest pages of human history."

During his visit back in February, Mr. Dieng observed: “It is evident that events of the past are being used for political purposes.”

He raised concerns over the rejection of judicial verdicts; glorification of war criminals and their crimes; appointment of convicted war criminals to public functions; and the negative impact that these developments would have on prospects for reconciliation in the country. 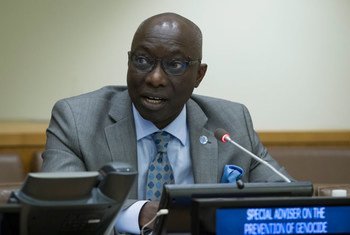 Concluding a twelve-day visit to Croatia, Montenegro, Serbia and Bosnia and Herzegovina, the United Nations Special Adviser on the Prevention of Genocide called for concerted and sustained efforts to prioritize reconciliation and prevention.