UNSMIL/Iason Athanasiadis
A view of the old town of Benghazi, Libya.
22 January 2015

The United Nations Support Mission in Libya (UNSMIL) today condemned the reported armed attack against the country’s Central Bank branch in the eastern city of Benghazi.

The Mission also called for the establishment of an independent commission of inquiry to investigate the situation, a UN spokesperson told the press at a Headquarters briefing this afternoon.

“UNSMIL says that the incident and the latest ceasefire breaches stress the importance of moving ahead urgently with the dialogue process, which remains the best solution to Libya’s deteriorating political and security situation,” said Mr. Farhan Haq.

It calls on all parties to do more to make sure that the truce, which the parties unilaterally agreed to last week, is fully respected in order to create a conducive environment for the dialogue.

The ceasefire was announced last week after a first round of intensive talks, hosted by UNSMIL in Geneva, during which participants agreed upon an agenda for discussions going forward, with the aim of reaching a political agreement to form a consensual national unity government, and making security arrangements necessary to end fighting and ensure the withdrawal of armed groups from Libyan cities. 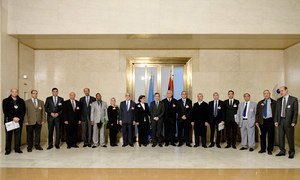 Three days after the end of the first round of talks under the Libyan political dialogue process, the United Nations Support Mission in Libya (UNSMIL) has today welcomed the unilateral announcements by the parties in Libya of a ceasefire in order to resolve the conflict peacefully through dialogue and the decision announced in Tripoli by Spokesman Omar Humeidan to join the second round of talks.Updated: 9.40 p.m.