After weeks of relative calm, the United Nations political chief said the Security Council was meeting today amid the ‘worst hostilities’ in eastern Ukraine since the Minsk Protocol was agreed on 5 September, with the urgently needed sustainable ceasefire presently existing in name only.

Briefing the Council on conflict-related developments and his visit to the country in December, Jeffrey Feltman said that while fighting had been initially concentrated around Donetsk airport, fighting is spreading throughout the Donetsk and Luhansk regions, reaching heavily populated civilian areas and inching dangerously close to Mariupol and Debaltseve.

“Encouraging signs of progress, such as the exchange of hundreds of prisoners, are quickly being overshadowed by renewed fighting and a deepening political stalemate,” said Mr. Feltman “Ukraine, as well as its neighbours and the broader region, cannot afford the current, violent status quo. The escalation of fighting threatens to unravel the Minsk Protocols.”

Intensification of the conflict had caused further deterioration of the humanitarian situation, Mr. Feltman said, stressing the importance of funding the 2015 Strategic Response Plan, which needed $189 million but had few commitments so far.

He also stressed that all parties to the conflict should guarantee free and unhindered humanitarian access to all people in need, irrespective of where they are located. A recent directive referring to movement between government-held to rebel-held areas could make movement of humanitarian actors harder, especially to areas beyond government control.

“Humanitarian actors must have access to do their life-saving work,” Mr. Feltman said. “A country which until a year ago had no displaced people now has at least 850,000 citizens displaced within its borders and over 600,000 in neighbouring states, according to Ukrainian sources.”

He said a Normandy Format meeting took place today in Berlin at Foreign Minister level and he hoped it would bring the progress needed for proper implementation of the Minsk agreements which he said offer a solid base for a resolution of the conflict in the Donbas as long as no party made unilateral attempts to change their provisions or selectively interpreted stipulations.

“It is our understanding that the apparent differences in interpretation of the Minsk accords are small but the implications of addressing them in any other way but through dialogue are immense,” he said.

During his recent visit to Ukraine, Mr. Feltman said he met President Poroshenko, Prime Minister Yatsenyuk, Foreign Minister Klimkin and other top officials, all of whom felt that, even with progress on the Minsk process, there was no quick solution the numerous challenges facing Ukraine, given the deep economic and geopolitical rifts that have been caused by and remain intrinsically linked to the conflict.

“Diplomacy has to succeed,” Mr. Feltman stressed, noting that the enforcement of a sustainable cease-fire, which presently exists in name only, is both urgent and of primary concern. “All of us – especially the parties to the conflict – have a responsibility to concertedly, and on a most urgent basis, assist in moving from a narrative of confrontation to a narrative of cooperation, from ‘a logic of war to a logic of peace.’” 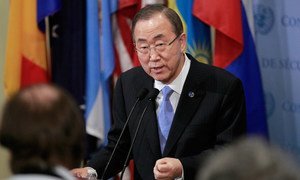 United Nations Secretary-General Ban Ki-moon has today said he is alarmed by the severe escalation of fighting for control of Donetsk airport in eastern Ukraine and implored all sides to make good on their commitments under the Minsk Protocol and Memorandum, with the first step being an immediate and full cessation of hostilities.