The top United Nations official in the Democratic Republic of the Congo (DRC) has expressed ‘full solidarity’ and support for the country’s Government as it continues in its fight against armed groups operating in the eastern part of its territory.

“The current fight against the Front de Résistance Patriotique de l’Ituri (FRPI) shows our determination to neutralize all the groups that have inflicted untold suffering on the Congolese population,” Martin Kobler, head of the UN Stabilization Mission in the Democratic Republic of the Congo (MONUSCO), declared in a press release issued earlier today.

Mr. Kobler’s comments follow a series of operations conducted against numerous armed groups operating in the DRC, including the FDLR (Democratic Forces for the Liberation of Rwanda), which missed a deadline for the unconditional surrender of its forces on 2 January. The UN Security Council subsequently appealed to Congolese President Joseph Kabila to authorize UN-backed action against that group.

They also come after a recent joint Congolese army (FARDC)-MONUSCO attack against the Ugandan-based rebels, Allied Democratic Forces, in the DRC’s North Kivu region and the arrest of Cobra Matata, the leader of the FRPI.

Meanwhile, the MONUSCO press release added, the fight against the remnants of the FRPI remains ongoing, with the group, which boasts a contingent of some 300 child combatants among its ranks, standing accused of gross human rights violations and illegal traffic of natural resources.

“I am more particularly shocked by the use of children by FRPI; it is a war crime,” continued Mr. Kobler.

“I fully support Government’s in firmly standing against all form of impunity for such a crime. These children have the right to a future.”

Speaking in South Africa today where he was holding extensive consultations with senior local officials regarding the urgent security and political issues facing the DRC and surrounding region, Saïd Djinnit, the UN’s Special Envoy for the Great Lakes Region, echoed Mr. Kobler’s appeal for decisive action against the armed groups active in the DRC.

“We continue to witness horrific acts of violence perpetrated by illegal armed groups in eastern DRC, many of which directed at women and children,” Mr. Djinnit declared in a press release.

“The six-month deadline given to the FDLR to voluntarily disarm by the International Conference on the Great Lakes region (ICGLR) and the Southern African Development Community (SADC) expired on 2 January, and in the absence of progress, military action by the Government of DRC and MONUSCO should now commence without delay.”

The UN Special Envoy commended the South African Government’s “firm support” for the UN Force Intervention Brigade’s mandate and said he looked “forward to prompt and decisive military action” against the FDLR, with “every effort made to protect the civilian population.”

In addition, he voiced satisfaction over the ongoing preparations for a Great Lakes Private Sector Conference in 2015 which, he said, would help boost regional investment and growth and bring concrete opportunities to the Great Lakes region at large.

“It is time for the region to turn the page, tackle decisively the root causes of the recurring cycles of violence, remove obstacles to progress, and take full advantage of the enormous opportunities for business and economic development through cooperation.” 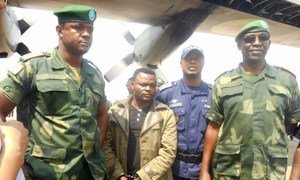 A joint operation by United Nations troops and the Congolese army (FARDC) took control of the main bases used by an armed group actively threatening security and stability in the Democratic Republic of the Congo’s long-troubled eastern region.