The United Nations Special Envoy on Ebola today described a growing feeling of confidence among those responding to the outbreak in West Africa, but he warned that there is an absolute need to maintain focus, vigilance and discipline to ensure that the disease is wiped out.

“In the last few weeks, we’ve seen a big shift, a sense of self-confidence a sense that it can be beaten,” David Nabarro said in an interview with the UN News Centre this afternoon. “[The shift] started in early December in Liberia, with some parts of the country that had been so badly affected beforehand reporting near zero or zero cases; other parts of the country at least beginning to feel better.”

This, Dr. Nabarro said, is a major change from when he took up his position last August. He describes the situation then as 'frightening' and filled with unknowns.

“We were bracing ourselves for some very bad news,” he said. “And there was bad news. September was worse, and October was difficult.”

In September, cases in the region were rising by 150 per day and the daily tally was increasing exponentially, with the outbreak accelerating ahead of the response. Since then, the daily figure for new cases has reduced to about 50 per day, with the number of cases week-by-week gradually reducing.

The Governments of the affected countries have been leading efforst to curb the spread of the virus, supported by the UN Mission for Emergency Ebola Response (UNMEER), operating in an area the size of France.

In recent weeks, Dr. Nabarro said, the response has taken on a much more local feel, shifting from treatment, safe burials and community mobilization to focusing on identifying those most at risk and those who have the disease, isolating them, and tracking down everybody with whom they have had contact.

“The phase that we’re involved in right now is called ‘case finding and contact tracing,’” he said. “It’s like detective work. And that’s where we are right now, with the absolute goal of reaching the point where there is no more Ebola infection in the region, and at the same time where we’re seeing a recovery of the normal aspects of life, like schooling, like healthcare, like agriculture and like markets, all the things that represent normal life coming back.”

That ‘detective work’ is part of what helps drive numbers of new cases down towards zero. Once new cases are emanating only from lists of people cited as having been in contact with someone who has Ebola, progress is being made towards zero cases. If surprises and flare-ups are still occurring, then there is still more to be done.

“In some parts of the region, I’m happy to tell you, that we really do understand the chains of transmission and the contact tracing is very good,” he said. “In other parts, we’re still getting surprises. Flare-ups suddenly occur.”

To maintain the vigilance and rapid response times that are vital to eradicating Ebola, Dr. Nabarro underlined the need for experienced epidemiologists and anthropologists, who together can keep a close watch on the levels of disease and what’s happening in the population to respond to it.

“We need them everywhere. We need hundreds of them,” he said, “because we need to be able to find every single person who has Ebola and keep them under surveillance and get them under treatment if they get sick and when they get sick.”

The experts need the support of supervisors; need the most effective IT for communication; and need transport systems so they can be supplied with everything they need in places without roads or access of any kind. People, materials and money will be vital going forward, and Dr. Nabarro said he would ask Governments and foundations to contribute on his upcoming trip to Europe.

He was also enthusiastic about news of success in efforts to develop a vaccine for Ebola, and stressed that once a viable vaccine is approved, at-risk health workers should be the first immunized.

“In the last few months, hundreds of health workers have got sick with the disease and too many of them have made the ultimate sacrifice,” he said. “I would like to be sure that the moment the vaccines becomes available, it’ll be the health workers who are most at risk who are protected.” 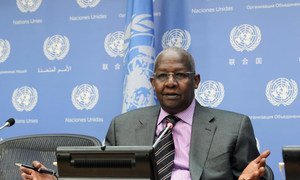 As the New Year begins, the 193-Member States of the United Nations are squarely focused on agreeing on a bold, ambitious and transformative post-2015 agenda that leaves no-one behind and provides a new framework for development and international cooperation for the next fifteen years, General Assembly President Sam Kutesa told reporters today.