With the “devastating conflict” in Syria entering its fourth year, the United Nations Secretary-General's Special Envoy for Syria said today that continued fighting in the country is a “disgrace” that has set the country back 40 years.

“We are starting 2015 with the Syrian conflict being the largest humanitarian crisis since the Second World War.”

He noted that Syrians had replaced Afghans as the world's largest population of refugees, pointing to the 7.6 million displaced people and 3.3 million refugees created by the conflict, as well as a further 12 million people in need of humanitarian assistance. Diseases like polio, typhoid and measles had returned to the country, he said, and 4,000 schools were unusable, meaning 3 million children were out of school.

“In 2015, this year, Syria had been expected to be one of the five top performers on the economic side in the Arab world, now it is the second before the last, just before Somalia,” he said, noting that the year had started with a renewed push for a solution to the crisis, and meetings with the Foreign Ministers of Iran and Russia, as well as the Secretary of State of the United States.

“They all agree that we need to do something to avoid that the Syrian conflict goes on a backburner and that movement towards some type of political solution should take place this year,” he said. “This is certainly good news in the sense that I am hearing the same in Damascus, I am hearing the same in the region. What we need to make sure is that this does not become like 2014, when we heard similar appeals from all of us, including the UN, and then nothing really happened.”

Recent developments underlined the need for action, he said, pointing to the pressures faced by Syria's neighbours as a result of flooding by refugees, to the recent terrorist attack in Paris, which connected to the origins and consequences of the Syria conflict, and to the presence of ISIL (Islamic State of Iraq and the Levant) in large parts of Syria and Iraq.

“The rest of the world is not immune,” he said. “This is why we cannot avoid raising a flag today of an urgent concern. This is why we are using in the beginning of the year to start saying let's make this year, as I am hearing from many political leaders, an opportunity.”

He urged implementation of UN Security Council resolutions on humanitarian access, foreign fighters and terrorist groups and he urged support for the proposal of a freeze to heavy fighting in Aleppo “because [the city] is a symbolic microcosm of all of Syria, because it has the highest number of displaced people, because it has seen two years of suffering, because while the Government and the opposition continue being involved in heavy fighting between them, [ with ISIL] only 20 miles away from Aleppo.”

The Government was the focus of intense negotiations to achieve the freeze, along with opposition forces, and Mr. de Mistura said his deputy, Ramzy Ezzeldin Ramzy would follow-up with further discussions. The freeze needed to be a simple reduction in violence to start with, he said, and possibly a freeze on all military activities to enable delivery of humanitarian aid.

“Our hope is that Aleppo could be a signal of goodwill, a confidence-building measure which could and can facilitate the re-starting of a political process with a clear political horizon,” he said, stressing that parties needed to bear in mind the (2012) Geneva communique while also unconditionally adjusting their aspirations in line with new factors in the reality of the area, such as the presence of ISIL forces.

The Special Envoy told journalists that he supported any initiative bringing together the Syrian people, including the potential meetings in Cairo and the Moscow initiative.

“Any initiative that brings together Syrian people can facilitate a dialogue and if it is among Syrians, it can also be a starting for a political dialogue,” he said. “We need to show that this year we are serious.” 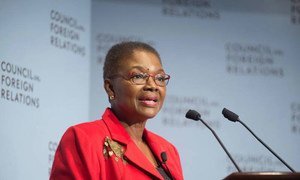 During a lecture delivered at the Council on Foreign Relations, the United Nations Emergency Relief Coordinator described the increasingly complex environments in which humanitarian actors work, as they deal more and more with the consequences of crises whose roots lie in poor governance, political paralysis, underdevelopment, and rising levels of poverty and inequality.