Jean-Marc Ferré
United Nations Headquarters in Geneva is the venue for talks between all major Libyan stakeholders.
13 January 2015

The United Nations is gearing up to kick-start a new round of political talks this week aimed at easing the deepening political and security crisis afflicting Libya, the UN Mission in the strife-torn country has announced.

In a press release issued today, the UN Support Mission in Libya (UNSMIL) said it will go forward with planned talks with all major Libyan stakeholders to be held at the UN Office in Geneva tomorrow, 14 January, in an attempt to reach agreement on how to peacefully manage the remainder of the transitional period.

“UNSMIL views this new round of dialogue as providing a key opportunity for the Libyan parties to engage in a political process that paves the way towards breaking the political deadlock underlying the political crisis and institutional crisis that have engulfed the country,” the Mission explained.

“In launching this new round of talks, UNSMIL reminds all parties that dialogue is an inclusive and transparent process that is driven by the higher Libyan national interest, including safeguarding the country’s national unity and territorial integrity.”

The move follows a recent outburst of violence which has further rattled the beleaguered nation, in conflict since the beginning of its civil war in 2011 which resulted in the ouster of late Libyan leader Muammar Gaddafi.

In addition to mounting numbers of casualties, the continuing fighting has also caused a humanitarian crisis with at least 120,000 people forced to flee their homes, resulting in consequent shortages in both food and medical supplies.

UNSMIL voiced hope that the planned talks would manage to secure the necessary arrangements for bringing about a total cessation of armed hostilities while also encouraging a phased withdrawal of all armed groups from all major towns and cities, including the capital, Tripoli, in order to allow the Government to reassert its authority over institutions and strategic installations.

Among those invited to the upcoming first round of political talks, the UN Mission said it had called upon political and civil society representatives to also attend. Meanwhile, subsequent rounds, potentially scheduled for next week, would include representatives from selected municipalities from across the country.

“A process like this cannot satisfy everyone in everything,” the UNSMIL press release continued.

“But what is important is that the Libyans seize this opportunity and take the necessary risks for peace by joining these talks, for they will be certain to achieve more by participating rather than by staying away.” 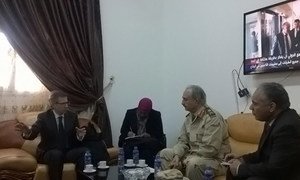 The top United Nations official in Libya, in discussions with the strife-torn North African nation’s leaders and stakeholders, has warned that time may be running out to put an end to the political and security crisis, stressing that it is extremely important to "freeze fire” so that political dialogue can begin.