UN Photo/Martine Perret
Patients who recover from the Ebola virus disease tie a ribbon to the tree on leaving the Maforki Ebola Treatment Centre in Port Loko, Sierra Leone.
31 December 2014

The number of Ebola cases is fluctuating in Guinea, decreasing in Liberia and showing signs the increase has slowed in Sierra Leone, the United Nations World Health Organization (WHO) reported today as the UN development agency said it is helping the Liberian Government build border posts to cut the cross-border spread of infection in West Africa.

“Infections in Liberia’s Eastern border region have spiked recently as tight-knit cross-border communities spread the disease across the often porous border,” the UN Development Programme (UNDP) said in a press release, adding that 49 new Ebola cases had been recorded in the border county of Grand Cape Mount in December, including 12 in the past four days.

UNDP Director for Liberia, Kamil Kamaluddeen, was quoted as saying that “the official border crossings from Sierra Leone into Grand Cape Mount are all patrolled, however, there are a number of places where it's possible to cross without detection.”

Motorbikes, tents, communications equipment and personal protective equipment will be also be provided for eight border crossings in remote areas bordering Sierra Leone, which will allow immigration as well as health workers to operate at the border, according to the development agency.

The outgoing head of the UN Mission for Ebola Emergency Response (UNMEER), Anthony Banbury, has acknowledged the difficulty in getting response workers to some of the remote areas, but noted the importance being present out in the districts. Mr. Banbury’s tour of duty ends on January 3, 2015 and he will be succeeded by Ismail Ould Cheikh Ahmed of Mauritania as the head of UNMEER.

WHO, in its latest update issued today, said the number of Ebola cases was fluctuating in Guinea and decreasing in Liberia, although Liberia reported more cases in the week ending 28 December than in the previous week.

WHO also said there are signs that the increase in incidence has slowed in Sierra Leone. “However,” it noted, “the west of the country is still experiencing the most intense transmission of all affected countries.”

To date, Ebola has affected more than 20,000 people with over 7,800 deaths, mainly in Guinea, Liberia and Sierra Leone.

“Interventions in the three countries continue to progress in line with the UN Mission for Ebola Emergency Response aim to conduct 100% of burials safely and with dignity, and to isolate and treat 100 per cent of EVD [Ebola Virus Disease] cases by 1 January, 2015,”according to WHO.

A total of 678 health-care workers are known to have been infected with Ebola up to the end of 28 December 2014, according to WHO, 382 of whom have died. The total case count includes 2 healthcare workers in Mali, 11 in Nigeria, 1 infected in Spain while treating an Ebola-positive patient, 1 in the United Kingdom who became infected in Sierra Leone, and 3 in the United States including 1 infected in Guinea, and 2 others infected during the care of a patient in Texas.

WHO also reported that the so-called Western Area Surge – an operation by the Government of Sierra Leone, WHO and UN partners – is intensifying efforts to curb the disease in the western parts of the country, particularly Freetown and neighbouring areas, to break chains of transmission, identify cases for early isolation and treatment, and conduct safe burials.

UNMEER said that in support of the Western Area Surge, USAID airlifted two urgently needed ambulances from Monrovia to Freetown, and the World Food Programme (WFP) has taken a series of measures to strengthen the capacities of its forward logistics bases.

The UN Mission also reported that the logistics commission of the National Ebola Response Cell of Guinea has said it needed more than 4,300 thermometers, including the thermo-flash, no-contact variety for medical facilities country-wide, as well as some 5.6 million pairs of surgical gloves for all health facilities.

In Guinea, the UN Children’s Fund (UNICEF) handed over 10 ambulances to national authorities for the fight against Ebola, and the UN Population Fund (UNFPA) more than $1 million worth of materials, including kits for Ebola survivors and pregnant women, as well as hand washing kits for maternity and youth centres. The donation also included 222 bikes and 36 motorcycles to facilitate contact tracing in affected communities. 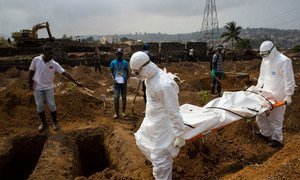