UN Photo/Martine Perret
The body of a suspected Ebola case in Sierra Leone is taken by an International Federation of Red Cross (IFRC) team on 24 December to the cemetery where it was buried in a dignified way.
30 December 2014

“Ebola is a very nasty disease, and it’s going to present us with some very unpleasant surprises I fear going forward,” Anthony Banbury told UN Radio in Monrovia, Liberia. “And that’s why we really need to strengthen our capabilities.”

“What’s so important is that we have good surveillance on the ground so we can have early detection of any outbreak and a rapid response capability so that any outbreak that is detected we can stamp quickly while it is a small outbreak and not allow it to become a big outbreak,” Mr. Banbury said.

Mr. Banbury, who is ending his tour of duty on 3 January 2015, met with Liberian President Ellen Johnson-Sirleaf during his two-day visit to Liberia and said he was “extremely pleased” with the progress he saw on the ground when he visited an area which has suffered from the outbreak.

He credited the “really important” role communities are playing and will continue to play in bringing to an end the outbreak, which has so far affected more than 20,000 with over 7,800 deaths, mostly in Guinea, Liberia and Sierra Leone, according to the World Health Organization.

While acknowledging the difficulty in getting Ebola response workers to some of the remote areas, he emphasized the importance of a district by district strategy and said: “We really need to be present out in the districts.”

UNMEER, meanwhile, reported that on 29 December, a healthcare worker was diagnosed with Ebola after returning to Scotland from Sierra Leone, and the patient was transferred to a specialist treatment centre in London the following day. Authorities reported that two more people were being tested for the virus, according to UNMEER.

And in Guinea, the UN mission also reported today that the UN Development Programme (UNDP) made additional incentive payments to 758 health personnel working in four Ebola treatment facilities in Guinea to ensure their continued engagement in saving patients. Together with UNMEER and the World Bank, UNDP assisted the Guinean Ministry of Health ensured that $220,000 were deposited in local banks.

Mr. Banbury will be succeeded by Ismail Ould Cheikh Ahmed of Mauritania as the head of the first UN-system wide operation to tackle a health emergency. 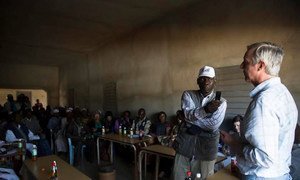