The Gambia: UN chief urges respect for rule of law amid reports of coup attempt

United Nations Secretary-General Ban Ki-moon has reiterated his “principled condemnation” of all attempts to seize power through unconstitutional means following reports of an attempted coup in The Gambia.

Gunfire was heard near the presidential palace in the capital of Banjul on 30 December while President Yahya Jammeh was out of the country, according to press reports.

Mr. Jammeh has since returned and media suggest that the coup attempt has been thwarted with the situation in the city now “calm.”

In a statement released today, the Secretary-General’s spokesperson said Mr. Ban was “following closely” the developments in the West African country and called for all parties to “exercise restraint and to refrain from further violence.”

“Noting the seriousness of any attempt to overthrow governments by force, the Secretary-General encourages the establishment of a transparent investigation into the events of 30 December, in compliance with due process and respect for the rule of law,” the statement continued, adding that Mr. Ban urged the Government of The Gambia, and its security and defense forces “to act in full respect for human rights.”

In addition, explained the spokesperson, the United Nations would continue to “closely monitor” the situation in the country as developments unfolded and more information became available.

Also today, the Security Council was briefed in a closed-door session on the situation in Gambia.

♦ Receive daily updates directly in your inbox - Subscribe here to a topic.
♦ Download the UN News app for your iOS or Android devices.
The Gambia 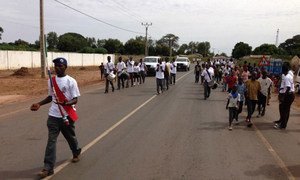 Two United Nations human rights experts were forced to suspend an integral part of their visit to The Gambia this week when they were denied access to parts of a prison and prevented from completing a torture and killing investigation during the first trip ever to the country by such an independent fact-finding team, according to a press release from the UN rights office.