UNHCR/B. Sokol
Displaced people in North Kivu. Many parts of the province have been relatively quiet in the past two years, but UNHCR is concerned about violence in the Beni region.
19 December 2014

Continuing violence and multiple attacks in the eastern Democratic Republic of the Congo (DRC) have sown widespread fear and sparked displacement of thousands of people, the United Nations refugee agency (UNHCR) reported today, amid appeals for humanitarian access to help those in distress.

In a press briefing earlier today in Geneva, Adrian Edwards, spokesperson for the agency, cited “credible reports” that at least 256 people, including children, have been massacred in North Kivu province in ongoing machete and axe attacks since October, with new attacks perpetrated by armed groups reported every week.

“The survivors and the displaced live in a desperate situation and in constant fear. They remain at risk of new attacks and have had no respite for the past three months,” Mr. Edwards told reporters. “They have little protection against violence and have received hardly any assistance.”

The bulk of the killings have occurred in and around the town of Beni, in the DRC’s North Kivu province. A recent attack on villages near Oicha, to the west of Beni, resulted in 52 people being “slaughtered,” he said, while a week later 19 more people were killed nearby.

In addition, the violence has caused a spike in displacement. The UNHCR spokesperson pointed out that some 88,000 people had been displace and forced to live in schools and churches, or with host families.

“We are concerned that this situation could result in rising levels of malnutrition and eventually in famine if the situation is not immediately addressed,” Mr. Edwards continued, adding that the UN refugee agency required “safe access” to the affected areas in order to provide the traumatized populations with humanitarian assistance.

According to UNHCR, people in the region are in dire need of basic aid items, clean drinking water and access to health services and schools, particularly as the region is highly vulnerable to outbreaks of malaria and typhus.

The agency called on the DRC Government to protect the civilian population in Beni and its surrounding areas while also urging the UN peacekeeping mission to increase its capacity to protect civilians. 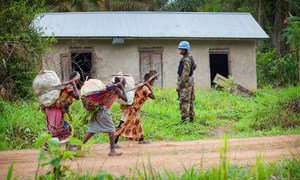 The security situation in the eastern Democratic Republic of the Congo (DRC) is “worsening,” a senior United Nations official has warned, citing an escalating trend of massacres in the town of Beni – the site of continuing flare-ups of deadly violence between armed groups, including Ugandan-based rebels operating in the area.