OCHA
A UN truck with humanitarian supplies at the Turkish side of the border awaiting green light to cross to the Syrian side, in March 2014.

17 December 2014
The United Nations Security Council has today renewed for 12 months the use of routes across conflict lines and several border crossings in Syria so that humanitarian assistance can reach communities in need, as it expressed outrage at the escalating violence that has killed nearly 200,000 people.

Unanimously adopting a new resolution this morning, the 15-member Council said it was “gravely distressed” by the deteriorating humanitarian situation in Syria and by the fact that now, more than 12.2 million people need relief aid.

Today’s resolution – pursuant to resolution 2165 (2014) – extends until January 10, 2016, the authorization for UN agencies and their partners to use routes across conflict lines and four border crossings – two in Turkey, one in Iraq and one in Jordan – so that humanitarian assistance reaches Syrian civilians.

In July, with resolution 2165 (2014) the Council authorized the United Nations to use routes across conflict lines and the border crossings of Bab al-Salam, Bab al-Hawa, Al Yarubiyah and Al-Ramtha to ensure that humanitarian aid gets to those in need. That initial authorisation was for 180 days.

Renewing that authorization this morning, the Council said it was “gravely concerned” with the ineffective implementation of its previous resolutions 2139 (2014) and 2165 (2014) and demanded increased aid access to civilians in hard-to-reach areas.

Today’s text also calls on all parties to the Syrian domestic conflict to cease attacks against civilians and the targeting of schools and hospitals, as well as the indiscriminate use of weapons, including artillery, barrel bombs and air strikes, indiscriminate shelling by mortars, car bombs, suicide attacks and tunnel bombs, as well as the use of starvation of civilians as a method of combat.

The resolution strongly condemns the arbitrary detention and torture of civilians, kidnappings, and forced disappearances, and demanded the immediate end of these practices and the release of all arbitrarily detained persons starting with women, children, the wounded and elderly.

Council members also expressed grave concern that areas of Syria are under the control of the Islamic State in Iraq and the Levant (ISIL) and Al Nusrah Front (ANF).

More than 3.2 million refugees, including more than 2.5 million women and children, who have fled Syria as a result of ongoing violence, the Council underscored, recognizing that the continued deterioration of the humanitarian situation in Syria poses risks to regional stability.

Council members also voiced support for the UN Special Envoy for Syria Staffan de Mistura and looks forward to his findings and recommendations. 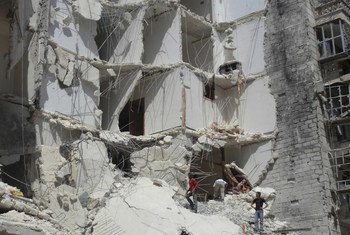 8 December 2014
The United Nations Special Envoy for Syria, Staffan de Mistura has met officials in Turkey as part of regional consultations related to bringing an end to the nearly four-year Syria crisis.