WFP/Sandy Maroun
A Syrian refugee family shopping for food in one of the stores with which WFP cooperates in Chtoura town, in Bekaa valley, Lebanon.
16 December 2014

Having raised $88 million in a 10-day global fundraising effort, the United Nations World Food Programme (WFP) today said its funding for December 2014 was secure and the agency could resume providing food assistance through electronic vouchers to 1.7 million refugees in Lebanon, Jordan, Egypt and Turkey.

“The humanitarian situation in Syria continues to deteriorate as winter arrives,” said WFP spokesperson, Elisabeth Byrs, during a press briefing in Geneva. “WFP plans to reach 4.25 million people inside the country in December. In November, we distributed enough food to feed just over 4 million people.”

The November figure means that 94 per cent of the agency's monthly goal was fulfilled, though some people could not be reached because of ongoing fighting.

WFP has to raise about $32 million every week to meet the food needs of people affected by the conflict in Syria, with every displaced Syrian requiring one dollar in order to be fed every day.

Ms. Byrs said that WFP would launch its response plan for 2015 in Berlin this week, alongside other UN bodies, including the UN Development Programme (UNDP), the UN refugee agency (UNHCR) and the UN Office for the Coordination of Humanitarian Affairs (OCHA). They aimed to reach 4.5 million people inside Syria and a further 2.6 million outside over the course of the year.

In the first three months of next year, WFP would need $339 million to support operations related to the Syria crisis, Ms Byrs said, underlining her gratitude for contributions raised in December, including $52 million from Saudi Arabia and $10.2 million for Norway.

Einar Bjorgo, Manager of the United Nations Institute for Training and Research's (UNITAR) Operational Satellite Applications Programme (UNOSAT) announced that a report on damage caused by the conflict to cultural heritage sites, would be released on 23 December. 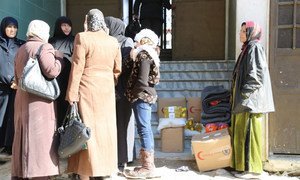 A week after launching its social media campaign to raise emergency funding for food assistance aimed at Syrian refugees, the United Nations World Food Programme (WFP) announced today that it had not only reached its initial goal of $64 million, but also exceeded it thanks to a “massive expression” of support from the public, the private sector and donor countries.