IRIN/Jorge Vitoria Rubio
A destroyed house in Ahy Badr in the town of Mizdah in the Nafusa mountains in Libya after tribal conflict in March 2013.
15 December 2014

“We consider the military escalation as a direct attempt to undermine the political dialogue efforts,” UNSMIL said in a statement on the escalation. “Those behind it clearly aim to scuttle the work to reach a political solution.”

Calling on all political actors to “shoulder their responsibilities with courage and determination”, the statement stressed that that the country’s transition is at a critical juncture and called on the various Libyan stakeholders to put national interests above all other considerations and to work towards achieving a consensus political solution that ensures Libya’s long-term stability and safeguards its sovereignty and territorial integrity.

“There can be no winner in the current military conflict and the use of violence and the force of arms will not succeed in achieving political objectives,” the Mission said. “The latest military escalation is evidence that dialogue to reach a consensus is all too necessary and should be pursued with stronger determination.”

The political dialogue aims to reach agreement on the management of the remainder of the transitional period, until adoption of a new permanent constitution. That statement pointed to progress made towards convening a session soon and noted that discussion would focus on solving the on-going crisis in the country

Talks would also provide a forum for political parties, tribal forces and armed groups to be active partners in searching for agreement and in establishing the necessary security arrangements end the armed hostilities raging in different parts of the country.

“The Mission continues to consult with the parties, and is working on finalizing the necessary arrangements to ensure a successful convening of the Libyan political dialogue,” the statement said, underlining the fact that “the vast majority of Libyans” demanded dialogue and that those involved in military activities were violating Security Council resolution 2174 (2014), and could face targeted sanctions. 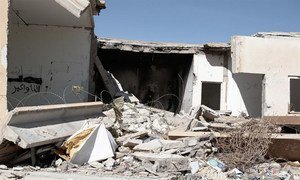 Ahead of dialogue due to begin tomorrow that is aimed at peacefully resolving the current political crisis in Libya, the top United Nations official in the country, Bernardino Leon, met with Libyan parties.